Star Wars Prequels Mapped Out In 1981. 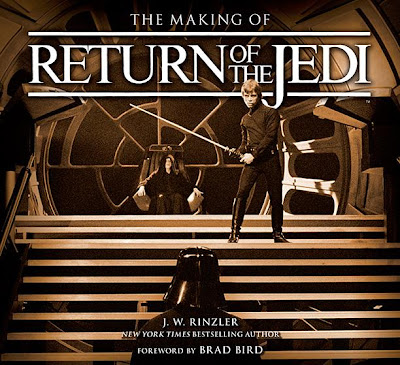 Every Star Wars fan under this sun is looking forward to J.W. Rinzler's next installment in his making of Star Wars books.  The Making Of Return Of The Jedi is out in September.  In the mean time the writer has released this quote from George Lucas which was taken from a conference call in 1981.  It shows an interesting insight into the Star Wars director and creator along with Lawrence Kasdan and how he had ideas for the Prequels, even back then.

“Well, anyway, Luke’s father gets subverted by the Emperor. He gets a little weird at home and his wife begins to figure out that things are going wrong and she confides in Ben, who is his mentor. On his missions through the galaxies, Anakin has been going off doing his Jedi thing and a lot of Jedi have been getting killed—and it’s because they turn their back on him and he cuts them down. The president is turning into an Emperor and Luke’s mother suspects that something has happened to her husband. She is pregnant. Anakin gets worse and worse, and finally Ben has to fight him and he throws him down into a volcano and Vader is all beat up. Now, when he falls into the pit, his other arm goes and his leg and there is hardly anything left of him by the time the Emperor’s troops fish him out of the drink. Then when Ben finds out that Vader has been fished out and is in the hands of the Empire, he is worried about it. He goes back to Vader’s wife and explains that Anakin is the bad guy, the one killing all the Jedi. When he goes back his wife, Mrs. Skywalker has had the kids, the twins, so she has these two little babies who are six months old or so. So everybody has to go into hiding.”