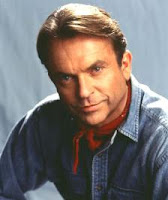 Sam Neill who played Dr Alan Grant in Steven Spielberg's 1993 Jurassic Park thinks that Jurassic Park 4 will be a reboot.  To quote Darth Vader in Revenge Of The Sith "NOOOOOOOO!"

Neill was quoted in an interview with Stuff.co.nz when asked about JP4:

Neill did confess that he hasn't seen anything on the "reboot" yet.

If this is true then this puts a whole damper on Jurassic Park 4.  Rebooting the original is like someone deciding to reboot Jaws or Raiders of the Lost Ark.  Please don't.  Leave it alone.