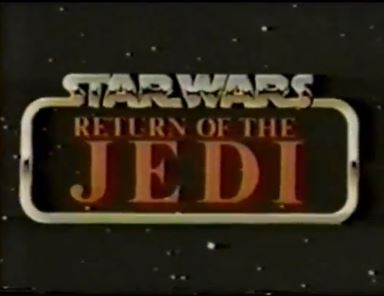 A Retrospective Look Back At Return of the Jedi

I was lucky enough (and old enough) to have seen Return Of The Jedi at the cinema in 1983. I was the perfect age, eleven years old. I was already a huge Star Wars fan thanks to the first two movies, but for some reason I was really sucked into the hype of the third Star Wars. There seemed to be more TV appearances from the cast of Jedi on our stations (all four of them here in the UK), of which I tried to catch, or at least record on my very own video tape to watch later. The movie trailer seemed to play more than ever on TV, and newspapers were doing Return Of The Jedi pull out specials. I was already spending all my pocket money on the stickers for my Return Of The Jedi sticker album, (I never got it complete.) and collecting all the Kenner figures and vehicles.

So you can see why I was so hyped up for the third movie. The day arrived where I was off to the cinema with a friend and after queueing for two hours at the local cinema which boasted two screens we were finally in and sitting at the front of the theatre. The buzz was electric, except to my right where all the smokers were lighting up. Incredible to think that back in those days the room was split into two. Right for the smokers and everywhere else for us non-smokers.

Finally, Return Of The Jedi hit the screen. Star Wars was back. To this day I vividly remember watching the first scene with the imperial shuttle coming out of the Star Destroyer and hearing those familiar Lucasfilm sound effects. I smiled so much. Like the first coffee of the morning or, if you smoke, your first cigarette of the day. I was getting my fix and feeling so satisfied. There was a problem though...

My friend who accompanied me had already seen the movie so knew what was coming up. I remember when Boushh appeared in Jabba's palace, in my ear I heard this little voice telling me "that's Princess Leia in that suit, come to rescue Solo." THANKS A LOT! It was the only time he did this. I think the look I gave him was enough for him to get the message.

As the movie continued I was completely enthralled. The first time I laid eyes on the Speeder bike scene was pure movie magic. I remember thinking to myself that I hope they do this in a video game some day.

Other things I remember were thinking the second Death Star was the first one from A New Hope. I thought the Rebels hadn't completely destroyed it, and also, when Luke cuts off Vader's hand and looks at his robotic hand, I really thought that Luke was turning into Vader. I kind of interpreted that scene as if Luke chopped off Vader's leg then he would have that leg on him. Strange how an eleven year old mind works.

Then came the Ewoks. Lets get this out there now. I loved and still love those little furry guys. I may have not got the meaning of Luke and his hand but I did get the message of seeing these cute tiny creatures taking down the mighty Empire. I'm not sure this would have worked as much with Wookiees.

I left the cinema buzzing. My love for Star Wars was greater than ever (if that was possible.) To this day every time I watch Return Of The Jedi it takes me to my happy place. I'm eleven years old again and makes me feel all warm inside. For that reason Return Of The Jedi is my favourite Star Wars movie. Happy 30th.


3D Deathchase on the Sinclair Spectrum.  This game was cutting edge at the time and was an obvious take on the speeder bike scene.  I thought it was incredible and so did the magazines at the time.  Your Sinclair and Crash both awarding the game high marks, especially for graphics.


One of my all time favourite John Williams piecces.