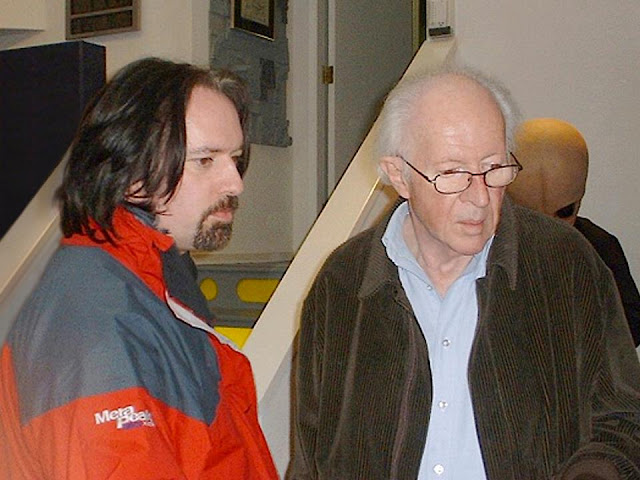 This week answering our quick fire questions we have an Emmy nominated concept artist, art director and Star Wars fan Paul Bateman.  Paul was the friend of and worked with the legend, Ralph Mcquarrie.  He has worked on a bunch of movies including Harry Potter and Revenge Of The Sith and is a frequent contributor to the always excellent RebelForce Radio with Jimmy Mac and Jason Swank.

You're stuck in a swamp on Dagobah.  What one movie, TV show, album and book would you take?
MOVIE:  Absolute no-brainer.  I’d miss ‘The Empire Strikes Back’ way too much to be without it.  ‘Empire’ is my favourite film by a light-year.   I love every frame of it so much. From start to finish it transports me completely, absolute cinematic perfection.

TV SHOW:  I really enjoyed the reinvented ‘Battlestar Galactica’. I just wish that the Syfy channel hadn’t dropped the ball on ‘BSG Blood and Chrome’. It seems completely crazy to me. Judging from the fantastic pilot I would have thought it would have been a licence to print money! Such enormous potential wasted.

‘The Clone Wars’ comes in at a very close second. At its best I think it’s WAY better than anything out there, animated or otherwise. When the core iconic characters have been central to the story I’ve loved it, but unfortunately every season there are a handful of episodes that focus on the folks in the sidelines, their stories interest me much less.

ALBUM:  ‘Human Remains’ by ‘Hell’ - it’s an incredible epic, tuneful, heavy metal masterpiece by some friends of mine in Derbyshire.  It rightfully shot up the metal charts all over Europe.  It’s produced by another friend of mine Andy Sneap who’s worked with many metal legends;  Megadeth , Cradle of Filth, Testament , Opeth, Onslaught etc, etc.  If you like old school quality metal I guarantee ‘Hell’ will blow your socks off.

BOOK:  For sentimental reasons I’d probably have to say the white first edition of ‘The Art of Star Wars’, with the Joe Johnston ‘Sketchbooks’ running a close second.   My parents bought me ‘The Art of Star Wars’ for my Birthday back in the 70’s. I honestly think there hasn’t been a week, possibly even a day since that I haven’t picked it up. (I know, I have a problem, it’s an obsession ;)

If you could invite any three people (alive or not, fictitious or not) to a dinner party, who would they be?
I’d zoom back to ‘74/’75 when design work was beginning on Episode 4 - I’d put on some flares and I’d go hang out with Ralph (McQuarrie) when he was my age.  That would be wonderful enough for me, but I guess I’d let Joseph Campbell and Carl Sagan come along too.  When Ralph was still with us I talked to him at length about his life and work, but it would be lovely to spend some time together  when it was all still ahead of him.  He could never resist drawing on any blank piece of paper, so I’d make sure he had a big pile of napkins to fill with magic.  I’d pass him a pen and encourage Joseph to tell a story like only he could, then as the stars came up I’d give Carl a nudge to get seriously cosmic and mind blowing.   That’s’ my idea of heaven, bliss.

What is your favourite John Williams soundtrack?
No big surprise:- ‘The Empire Strikes Back’ soundtrack.  I love film music. I have thousands in my collection. I love the way they can change the art I create.  But I always come back to ‘Empire’, I never tire of it.

If you were invisible for a day what would be the first thing you would do?
Drop by the ‘Episode 7’ development meetings and whisper a few suggestions into every ear at the table.   “Go to Hoth, Bespin, Dagoah, Mos Eisley. Abandon the rule of two. Midi-chlorians were propaganda, blow up Naboo, Boba Fett lived, Yoda’s master returns etc etc....”

When was the last time you cried?
Embarrassingly I cry all the time, but then I’m a big animal lover and the internet is unfortunately rife with a lot of very sad imagery, it takes me about 1 second to get really upset and angry over any cruelty to animals.

However the last time I had a really proper from the gut, out of the blue sobbing session was when I handled some of Ralph’s original ‘Star Wars Episode 4’ art for the first time.   I’d handled much of his work, many times before, but those specific pieces were such a huge deal to me that I burst into tears. I love that stuff so much, I’m very connected to it.  To me, it’s the most important art in the world. That may sound crazy, but in all sincerity that’s how I feel.

What is your biggest fear?
That would be way too dark and scary to discuss in a public place. Let’s just say I have an expansive imagination; full of incredible wonders and unspeakable terrors that would make Stephen King go pale.

If pushed I’d go with finding out that the ‘Moomin’ stories are true and my life has been made up by Tove Jansson on a drunken night out with Frankie Boyle and Timothy Leary.

What was the most embarrassing moment of your life?
When I almost knocked Stanley Kubrick flying on the set of ‘Eye’s Wide Shut’.

Excluding search engines, what three websites would you choose if no other websites were available?
www.collider.com - for my daily fix of geeky news. They pip everybody to the post.

www.amazon.co.uk   - I can’t live without it.  If a book isn’t delivered to the door in the morning I feel like something’s wrong with the world. I have a huge appetite for anything that explores film or art theory and an addiction to European graphic novels; in particular anything by Jean Giraud (‘Moebius’), Philippe Druillet, Enki Bilal, Jean-Claude Mézières, Juan Antonio Giménez  etc.

http://gurneyjourney.blogspot.co.uk/   -  James Gurney’s art blog. It’s a fascinating exploration of artistic theory and technique. It can be very difficult to find real quality, complex educational material once you get to a certain level as an artist, but James’s site never fails to illuminate.

Do you have any guilty pleasures?
I love many ‘bad’, or at least very odd sci-fi movies and TV shows ; Michael Moorcock’s The Final Program, lots of René Laloux’s work, Danger Diabolik, Barbarella, Doc Savage, Zardoz,  Battle Beyond the Stars, The Humanoid,  Return to the Planet of the Apes, Valley of the Dinosaurs, Buck Rogers, Logan’s Run, The Martian Chronicles, Flash Gordon, Warriors of Virtue, Space 1999, Droids, The Star Wars Holiday Special, Blake’s 7, Star Maidens... you get the idea,  I could go on forever here ;)

What are you looking forward to the most in the next six months?
Something extremely exciting – but I’m not allowed to say a word about it.

What is your most treasured possession?
A paintbrush that belonged to my friend Ralph (McQuarrie)

What is your biggest regret?
That I didn’t get to lean on his board and watch him paint, or have a chance to spend another ten years with him in good health.

What are you most proud of?
A bunch of things that all in the end come right back to Ralph....

Having him smile and tell me he was happy with how I’d handled his work and that it “had never looked better”.   Watching him explore my art and listening to his kind compliments. Just helping my friend Stan Stice put together two definitive book collections of Ralph’s work.     (http://dreamsandvisionspress.com/books.aspx)

What is your favourite Spielberg movie?
Has to be ‘Raiders of the Lost Ark’.  Harrison Ford was already a film star in the old fashioned sense, but ‘Raiders’ made him an icon.  In recent years nothing has really gotten close for me. I’m really an old school Spielberg fan, in fact I’d actually say my favourite recent ‘Spielberg’ movie was J.J. Abram’s homage ‘Super 8’. I really enjoyed it  - felt like something I’d missed from the 80’s.  I can’t wait to see what he brings to the sequels.

Where can people keep in touch or follow you?
Folks can listen to me when I pop up on Rebel Force Radio (www.facebook.com/RebelForceRadio).  I can be spotted occasionally on Twitter @PaulRMQ  . Or folks can check out what I’m up to over at  www.facebook.com/paul.bateman.986


Big thanks to Paul for taking the time to answer our questions.  Seems like Paul is a huge retro fan too.  He may be interested in our retrospective look back at StarCrash and Defcon 4.

Next week we complete our questions on the JediNews crew with Matt Booker taking the helm.