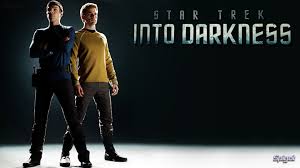 There may be a few spoilers in the following review.

Four years ago, a new generation of fans were introduced to the world of Star Trek. Some in our own world had never known of Kirk, Spock, McCoy and the crew of the Starship Enterprise before J.J. Abrams interpretation of Star Trek was released. Some of us remembered it well before this and in many different forms. But one thing is certain when it comes to JJ Abrams' Star Trek re-boot, and that is that it did exactly the same as Gene Roddenberry's original 1966 version in that it brought generations together and transported them into the fictional future adventures of mankind. As a result of the Star Trek movie, a sequel was always going to be on the cards...

STAR TREK : INTO DARKNESS
It was Thursday 9th May 2013, at Vue Cinema, Cwmbran and one of the first screenings in the UK of Star Trek - Into Darkness, the highly anticipated sequel to the 2009 hit blockbuster movie.

I had been looking forward to this for a very long time. From the first moment I had originally watched Chris Pine, Zachary Quinto and Karl Urban taking on the iconic roles of Captain James T Kirk, Mr Spock and Doctor McCoy, I was hooked on this latest reincarnation! And so to now finally get another brand new story and see this new, and yet seemingly familiar crew back together on a brand new adventure was not to be missed! My initial overall feeling at the end of this movie was not what I had been hoping for. I was not feeling the same buzz that had happened after the first Trek movie. I was disappointed with certain aspects of the story line, and without spoiling things too much, I am referring to almost stepping back 30 years in our own timeline and revisiting something very familiar in Star Trek of old. Somehow, I thought there were lazy elements in the story with this film, and after the bold decisions made on the original with the alternate timelines, I felt that the opportunity to treat this as the new adventures of this current crew were missed. Then I stopped and looked with the fresh eyes of that new generation audience who had never been in the Trek worlds of the past Suddenly what I had just watched for over two hours was really just as awesome, if not better, than what had boldly gone before...

All of the main characters return for this episode of the story, along with a new villain - John Harrison - a Starfleet officer on a mission of his own. But what is that mission, and what will follow if he achieves his goal?

Following on shortly after the original, we open with some fast paced, action packed scenes, prime directives and some amazing 3-D effects, which spill throughout this film. I will admit I agree with some production staff that 3-D wasn't really needed for this film. I personally think, as impressive as it is, it wasn't essential, and didn't bring anything extra to the party. I appreciate that some would certainly disagree with me on this.

The musical score by Michael Giacchino - returning from the original - was once again outstanding, as was the overall sound and visual effects of the film. There are a great deal of breathtaking effects on show here that do not disappoint. It will be one soundtrack at the top of any Star Trek fans want list, including my own!

The actors mix seamlessly as if they have been there for years, something I enjoyed from the first film with the entire cast, (well, maybe Mr.Pegg as Scotty is debatable.Sorry!), hitting the mark with some terrific acting and on some brilliantly designed sets to boot. This brings me onto the villain of the piece, Benedict Cumberbatch as Kh,..John Harrison. And boy, this guy really can deliver a performance and steals every scene that he appears in with his presence. I certainly expect to see Mr Cumberbatch on the big screen for the foreseeable future!

Keep away from the spoilers, buy your popcorn on the way in and go and lose yourself in two hours of pure sci-fi entertainment! It will be a definite hit with the new followers to the franchise. For any of the old Trekkies(ers) who might feel similar to my initial thoughts, go and see it again. You will see it in a different light and embrace the return of Star Trek to the big screen!