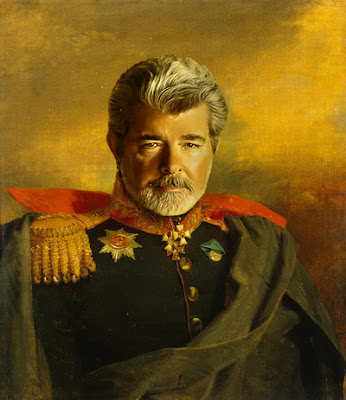 San Francisco Museum Of Modern Art are to present George Lucas with a lifetime achievement award.  The award will be given to the Star Wars creator in October this year.  Seems the retired director has got a busy year ahead of him with a wedding and now this.

San Francisco’s foremost art museum is doing its best to get on a likely competitor’s good side. At an October 24 dinner ceremony SFMOMA will give George Lucas — whose plan to build the billion-dollar Lucas Cultural Arts Museum celebrating “the art of storytelling” in the city’s Presidio Park is one of three shortlisted proposals — its 2013 Bay Area Treasure Award. The prize, which is bestowed annually by SFMOMA’s foremost fund-raising affiliate, the Modern Art Council (MAC), recognizes visual art pioneers based in the Bay Area.

“I’m proud to be recognized by SFMOMA and this award in the Bay Area,” Lucas said in a statement. “It’s an honor to be included in the company of such esteemed artists and cultural figures.”

“We’re honored to celebrate such an original talent,” the president of the MAC, Joni Binder Shwarts, said in a statement. “Lucas’s influence has made our region a center for innovation in film and animation. He has also contributed greatly to the community through his support of progressive education in K-12 schools, a shared priority for the museum.”