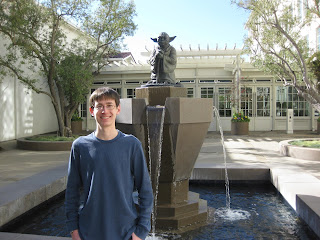 Continuing our Forcecast special this week we have Eric Geller stepping up to the plate to answer our questions.  Eric joins Erik Blythe weekly in hosting the Forcecast podcast and is also the social media director for The Forcecast.net and the excellent Rebelscum.com.

You're stuck in a swamp on Dagobah.  What one movie, TV show, album and book would you take?
Movie: Star Wars Episode III: Revenge of the Sith

TV show: The West Wing
Album: I’m not really into music. I’ll go with the Revenge of the Sith soundtrack.
Book: Star Wars: Shatterpoint by Matthew Stover (somewhat relevant if I’m trapped in a swamp!)

If you could invite any three people (alive or not, fictitious or not) to a dinner party, who would they be?
Jon Stewart, Stephen Colbert, and Neil deGrasse Tyson.

What is your favourite John Williams soundtrack?
This is such a tough one. My favorite Star Wars music spans all six films. In The Phantom Menace, it’s the Droid Invasion Theme. In Attack of the Clones, it’s Across the Stars. In Revenge of the Sith, it’s Battle of the Heroes. In A New Hope, it’s Binary Sunset. In The Empire Strikes Back, it’s The Imperial March. In Return of the Jedi, it’s Victory Celebration.

But if I absolutely had to pick just one, it would probably be Victory Celebration. There’s just such a happy finality to it, as if we can all just sit back, relax, and reflect on what we’ve just seen. For a long time, that was the accepted end of the Star Wars film saga, and Victory Celebration really conveys that sense of bittersweet –– but still upbeat –– farewell.

If you were invisible for a day what would be the first thing you would do?
Probably sneak into Kathleen Kennedy’s office at Lucasfilm and watch the Episode VII-related decisions that came across her desk.

When was the last time you cried?
Two weeks ago.

What is your biggest fear?
Massive, public humiliation.

What was the most embarrassing moment of your life?
When I was young, I went to an acting camp and participated in several plays. One of them was a Sherlock Holmes spoof in which I played the lead role of “Sharklock Hog.” Midway through a monologue, I abruptly forgot the rest of my lines. The monologue quickly became a dialog as my fellow actors prompted me through the rest of the speech. I was mortified! The funniest part of that experience was that, after the play ended and the actors trouped off the stage, someone asked me for an autograph on their playbill!

Excluding search engines, what three website would you choose if no other websites were available?
If we’re excluding search engines, does that exclude all of Google’s other services? Because I probably couldn't live without Gmail and Google Calendar. If I can’t include the Google empire, I’ll say Twitter, Facebook, and Reddit.

Do you have any guilty pleasures?
I eat far too many ice cream sundaes.

What are you looking forward to the most in the next six months?
Finishing my junior year of college and hopefully getting an exciting internship.

What is your most treasured possession?
I’m not sure which of my possessions has the most sentimental value to me, but the one item without which I can’t go anywhere is my phone.

What is your biggest regret?
Let’s just say you don’t know what you've got until it’s gone.

What are you most proud of?
My priorities in life and my values.

What is your favourite Spielberg movie?
Raiders of the Lost Ark.

Where can people keep in touch or follow you?
Twitter is the best way to follow everything I do, say, and think. I’m on Twitter as @ericgeller. My Star Wars news reports, interviews, reviews, and other writings appear at TheForce.Net, while my voice can be heard on The ForceCast podcast.


I want to thank both the hosts of The Forcecast for taking the time to answer the quick fire questions.  Click here to check part one, Erik Blythe's answers.

Next week we have roleplaying and gaming editor for JediNews, Jonathan Hicks.