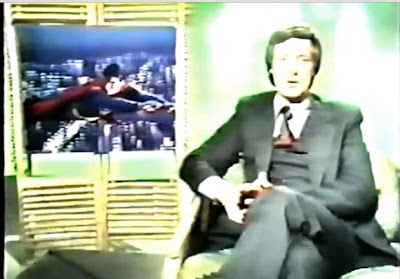 This is a rare video of BBC's Barry Norman in 1978 talking about the upcoming movie called Superman.  The video quality isn't the best, after all it was recorded onto VHS in 1978 and probably didn't use a Scotch tape, (re-record not fade away.)

The video then cuts to various news reports on the movie including the movie royal premiere of Superman.  This video is like a time machine and will bring a smile to your face if you remember the 70's and in particular British TV.  There is a great part when Christopher Reeve tells a kid that "no one can actually fly so don't try to jump off a kitchen table."  The video ends with Barry Norman's actual review of the movie and classes Reeve as one of his best newcomer's of the year.