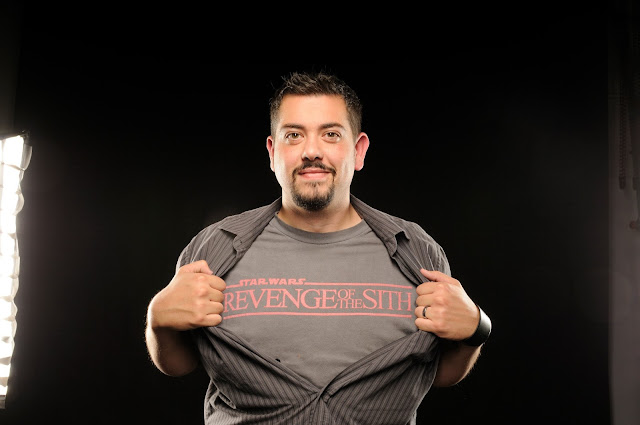 This week's quick fire questions are being shot at Bryan Young from the most excellent Star Wars podcast, Full Of Sith. Bryan is also editor-in-chief of one my favourite lunch time websites, BigShinyRobot.com. As if this wasn't enough Bryan also writes regular articles for The Huffington Post and has a monthly column on the official Star Wars website. He is also an author and you can catch up on his writings over on his website http://www.bryanyoungfiction.com/

Right this should be a good one. Here we go:

1 You're stuck in a swamp on Dagobah. What one movie, TV show, album and book would you take?
That's easy, Return of the Jedi, The Clone Wars, Slim Cessna's Auto Club's "Cypher," and something from Kurt Vonnegut's ouvre. Or Graham Greene. Damnit, maybe some Hemingway. Or Steinbeck's East of Eden. That really wasn't as easy as I thought it was going to be.

2 If you could invite any three people (alive or not, fictitious or not) to a dinner party, who would they be?
Franklin Roosevelt, Orson Welles, Kurt Vonnegut, Jr.

3 What is your favourite John Williams soundtrack?
Star Wars. All six film soundtracks count as one continuous soundtrack, right?
Let you off - Rob

4 If you were invisible for a day what would be the first thing you would do?
Invisibility doesn't hold a lot of interest to me, but I suppose I'd use it to sneak into Skywalker Ranch... Or Michael Arndt's office to read the script of Episode VII.

5 When was the last time you cried?
The last time I cried, honestly, was the season 5 finale of The Clone Wars when it aired on television. I'd already seen it and knew what was coming, but it didn't matter. The waterworks happened. The best way to enjoy a story is to suspend all of your disbelief and invest in the mythology of a thing. When you do that, and can surrender your emotions to it regardless of the technicalities of it, you're going to enjoy it more.

6 What is your biggest fear?
My biggest fear? I get sick thinking about mortality and the size of the universe. I blame Woody Allen for that.

7 What was the most embarrassing moment of your life?
Hmm... Most embarrassing. It might have been publishing my first book, Lost at the Con. It's hard to describe the feeling of total vulnerability of putting out your work knowing that there's going to inevitably be a mistake in there. Then when you're called on one for the first time it's like being naked in public or something. And when you release that first book, it's a fact of life that you're going to read a bad review, and that really makes you feel embarrassed. Being an artist is emotionally exhausting, because first you have to mine the depths of yourself and then expose it for all to see. Artists have my utmost respect.

8 Excluding search engines, what three website would you choose if no other websites were available?
BigShinyRobot.com, Some means of social media, and The Huffington Post

9 Do you have any guilty pleasures?
Yes.

10 What are you looking forward to the most in the next six months?
The thing at the moment I'm most looking forward to is the three week sabbatical I'm taking in Paris. I have nothing planned other than a very general "go sight-seeing and write a book." I've never been to Europe and the prospect of pretending to be an ex-patriate American writer while I'm there like Ernest Hemingway is thrilling to me.


11 What is your most treasured possession?
Do children count? I guess they're not much of a possession. I think excluding people on that list, it might be my copy of Jaws on DVD. I bought it and insisted on watching it with my then girlfriend instead of going out to do something. She ditched her friends to sit and watch it with me, and as the movie unfolded I came to the realization that any girl who would ditch her friends to watch Jaws with you was a keeper. Right in the middle of the USS Indianapolis speech I paused the disc, asked her if she thought like getting married, and the answer was yes. Jaws has always held a special place in my heart and that first DVD copy I own is particularly special to me. But there are other things, too. I had an abusive father and the one time he showed me any affection or encouragement for my career as a writer at all was when I was about 15. He bought me a copy of Kevin J. Anderson's Jedi Search and on the dedication page crossed out the print and wrote, "For Bryan, who takes to writing like a fish to water." It was the one genuinely nice thing he ever did for me. We haven't spoken in more than a decade and probably won't ever again, and I like to think the man who wrote those words was Darth Vader taking the mask off for the last time and revealing Anakin Skywalker, seeking forgiveness moments before his death.

12 What is your biggest regret?
My biggest regret is that I constantly bite off more than I can chew and feel like I'm not spending enough time with my kids, but if you ask them I spend more than enough with them. They're getting to be that age.

14 What is your favourite Spielberg movie?
Jaws, for the reasons stated above. It's tied with all four Indiana Jones movies, though, for altogether different reasons. Though mainly Raiders of the Lost Ark.

15 Where can people keep in touch or follow you?
I'm on twitter @swankmotron, on facebook at facebook.com/bryanyoungfiction, and people can listen to me on the Full of Sith podcast. I'm the editor-in-chief of BigShinyRobot.com, and I write regularly for The Huffington Post. I also have a monthly column on StarWars.Com about the cinema influences behind the Star Wars saga. Most importantly, though, I'm an author, and I'd love for people to check out my prose at www.bryanyoungfiction.com

Great answers there from Bryan. Thanks for answering them. Make sure to check out the Full Of Sith podcast where you can listen to Bryan on the show along with Tha Mike Pilot and Consetta Parker who answered our questions a few weeks back. Next week we have Matt Martin of Lucasfilm.