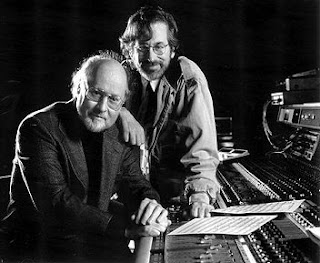 John Williams has selected four additional music queues from the Jurassic Park movie to add to the soundtrack’s 20th anniversary re-release for the first time ever.
Music Connection says, these four songs “were chosen by Williams in conjunction with his music editor, Ramiro Belgardt. Williams and Belgradt went back through all of the master tapes of the film to spot cues that were not released on the original album.”
The new track listing is as follows. The new songs are tracks 17 through 20:
1. Opening Titles2. Theme From Jurassic Park3. Incident At Isla Nublar4. Journey To The Island5. The Raptor Attack6. Hatching Baby Raptor7. Welcome To Jurassic Park8. My Friend, The Brachiosaurus9. Dennis Steals The Embryo10. A Tree For My Bed11. High-Wire Stunts12. Remembering Petticoat Lane13. Jurassic Park Gate14. Eye To Eye15. T-Rex Rescue & Finale16. End Credits17. The History Lesson18. Stalling Around19. The Coming Storm20. Hungry Raptor

Well it goes without saying  I will be getting this.  I will let you know what the additional tracks are like and post a review here.