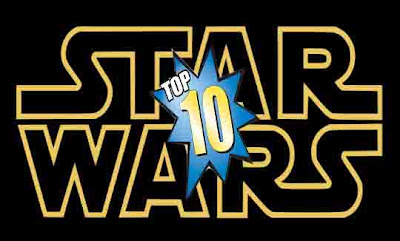 With the internet buzzing at the moment with speculation of who will be in Star Wars VII I thought I would speculate who will NOT be in the movie.  With just a hint of sarcasm I give you ten Star Wars characters you are unlikely to see in Star Wars VII.

10 - Jira (Storms coming Annie, you better get home quick.)
Yes that old lady from Phantom Menace.  I'm only guessing here but I would be very surprised if we see her or her food stand in Star Wars VII.  I would hope she's paid the mortgage off on her hut now and enjoying enjoyed a quiet retirement making wind chimes to warn visitors of any incoming storms.

9 - TK-421 (Why arn't you at your post.)
I can reveal to you now that a source told me he was asked to be in Star Wars VII. Yes really!  But on the day of the audition they called his name and he was no where to be seen.  Shame.  Next!

7 - The Max Rebo band
Shortly after the Jabba performance the band split up and Rebo opened up a restaurant chain.  The other band members went their separate ways but weren't as successful.  Snootle become addicted to spice while Snit wandered off into the desert on Tatooine never to be seen again.  Although there is no chance of a come back their greatest hits are constantly in the Empire-records top 40 holographic downloads.

6 - Elan Sel'Sabagno (You wanna buy some Death Sticks?)
After going away and evaluating his life, Elan for a brief time handed out leaflets explaining the danger of death sticks.  This didn't last long and evaluated his life once more.  He became a blogger and started a podcast called Full Of Sticks.  He quickly became a huge celebrity on Coruscant and very soon couldn't leave his apartment without being noticed.  Eventually he became a recluse and after a one off special podcast in which he said his goodbyes he was never seen or heard from again.

5 - Kabe
I would imagine judging by his eagerness for a drink that his liver(s) exploded.

4 - Amanaman
Amanaman sold his staff which had his victims heads attached and lived his remaining days a rich Planariam.  Unfortunately he met a soggy end when, while on his private island he decided to go for a swim and quickly realised he was allergic to salt water.  His body shrivelled up and he never recovered.

3 - Vlix
Having had great difficulty in tracking him down, the casting team for Star Wars VII were disappointed to find that he was just too expensive.

2 - Kitster
It was decided very early on that under no circumstances was Kitster to appear in Star Wars VII.  (Although there are increasing rumours that he may have his own spin-off movie.)

1 - Jar-Jar Binks
It is has been rumoured that if Jar Jar even has a walk on part in episode VII the Internet will implode, economies will once again collapse and the world will end.

Any I've missed?  Let me know below.