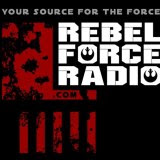 Here's the official press release from RebelForce Radio. It all kicks off Saturday.

CHICAGO-George Lucas’ galaxy far, far away is about to get a lot closer as Jason Swank and Jimmy “Mac” McInerney (The ForceCast) present REBELFORCE RADIO, a new, independently produced weekly podcast featuring news, reviews, celebrity interviews, contests, and more from the ever expanding Star Wars universe.

Hosted by podcasting veterans Jason Swank and Jimmy Mac (The ForceCast), RebelForce Radio will provide information and entertainment to a growing world-wide audience of Star Wars fans. The podcast will be broadcast LIVE Tuesday nights via the show’s website and released widely on Fridays for on-demand streaming and download. RebelForce Radio will also be heard Sunday afternoons at 2:00 PM Central on Chicago’s 1530 WCKG AM.

“We have always prided ourselves on our ability to deliver fun and exciting content to Star Wars fans worldwide. Our production standards of the past will be very obvious as we move forward with RebelForce Radio, as will our passion, which we share with our listeners. It’s not the end of an era, but the beginning. The best is yet to come!,” said Jimmy Mac, the show’s producer and co-host.

RebelForce Radio is an extension of the hosts passion and enthusiasm for the Star Wars franchise. As life-long fans, Swank and Mac have traveled all over the globe, from Tokyo, Japan to Skywalker Ranch itself, to provide the most comprehensive internet coverage of major Star Wars related events! Listeners have enjoyed the podcasters in action during live shows from the floors at Star Wars Celebrations IV-VI and Star Wars Fan Days. Swank and Mac also wrote and produced "The George Lucas Hip-Hop," winner of the 2008 Star Wars Fan Film Awards for Best Animation and Fan's Choice. At Star Wars Celebration V in August 2010, Lucasfilm's Dave Filoni (Supervising Director, Star Wars: The Clone Wars) recognized Jason and Jimmy as the inaugural inductees to his “104th Wolf Pack” organization for their "outstanding fandom and support of Star Wars.” The two were also inducted as “Honorary Friends” of The 501st Legion, a worldwide Star Wars costuming organization known for their charitable work and frequent presence at official Lucasfilm events. Swank and Mac enjoyed similar honors by The Rebel Legion, another well-known Star Wars costuming group, and been profiled in Star Wars Insider Magazine, LA Weekly, and Chicago's Daily Herald, among other publications and websites.

“The unintended consequence of the show has been that we are able to go places that not every fan can, and talk to the people who actually make Star Wars. It challenges us to do the kind of show that we would want to listen to,” said show co-host, Jason Swank.

RebelForce Radio premieres Saturday, January 19 featuring Supervising Director of Star Wars: The Clone Wars, Dave Filoni. A short promo was released earlier this week and debuted at #1 for the TV/Film category in iTunes Podcasts. A video version of the promo is available on the official RebelForce Radio Facebook page, which has already generated over 1,200 “likes” since its launch three days ago.

Listeners will soon be able to stream and/or download RebelForce Radio content on demand for free atrebelforceradio.com when the site launches later this month, or by subscribing via iTunes.

Please find the latest news from RebelForce Radio below.

The video promo referred to in the announcement is available below.


Thank you for joining us on our new adventure: RebelForce Radio.