Did Peter Jackson Ruin The Hobbit with HFR?

Although Avatar was not the first to use the new standard of 3D, in my opinion it was the first to really show it's potential, especially if you were fortunate enough to see the film in IMAX.  It was a visual feast like I've never seen and will never forget.  It should have been a game changer.  Sadly, that hasn't been the case.  While James Cameron spent years making Avatar, putting his soul into the visual effects and ensuring the 3D offered an experience which pushed new boundaries, the vast majority of subsequent moves have been lazy, using 3D in an unashamed attempt to 'cash-in' .  Many films, instead of being shot with 3D cameras as they should be,  just converted post production, Clash of Titans notably comes to mind.  Its 3D offered us a never seen before cardboard cut-out effect, with acting to match!

Now we have the next visual leap being offered to cinema goers in the form of the high frame rate (HFR) version of The Hobbit.  When I read Peter Jackson's brief but interesting Q&A on HFR, I learned that the 24fps standard we are all used to dates back to 1927.  It was primarily a commercial decision to shoot in that frame rate, to achieve a balance between sound fidelity and saving costs on 35mm film stock.  In the digital age we live in, that reason no longer exists.

The Hobbit is shot in 48fps, and our eyes roughly see the real world in around 55fps.  So logic would dictate that this increase can only do one thing, make everything seem more real! So, what did people think?  The majority of reviews I've read seem to dislike it, saying it's at best distracting and at worst makes the movie appear like a cheap TV film.  A friend even warned me off the HFR version, stating it spoilt the movie.  So, naturally, I had to see the HFR version.

When The Hobbit began I was sat there in fear of what these extra frames would do to me, would I want to just walk out as I realised the mistake Peter Jackson had made, and reschedule my viewing in the cosy 24fps world I know so well?  Well, the answer is no!  The extra frames give a realism I've never seen before, and I loved it!  Those who shared my positive experience have likened it to watching a very high production value stage play, and I can see where they are coming from. It is no bad thing.  Sure, it is a bit disconcerting at first, we are so used to the 24fps format, but some of the shots in the film are truly epic as a result of 48fps.  Those who love action cannot fail to enjoy what's now on offer, even in chaotic battle scenes you can make out EVERY single movement, there is no blur or visual confusion, each and every swing of a sword will be there to watch clearly.  It also takes away the eye strain of 3D, I actually think that 3D and HFR sit together in a perfect partnership.  However, not all of it worked.  Some shots did look very cheap or just strange, mainly due to CGI which just couldn't stand up to those extra frames.  There were also moments where I felt the movie were in fast forward, I can only assume this was me not being used to it. I realise that film makers will only get better using the technology, and can forgive The Hobbit these moments of visual failing. 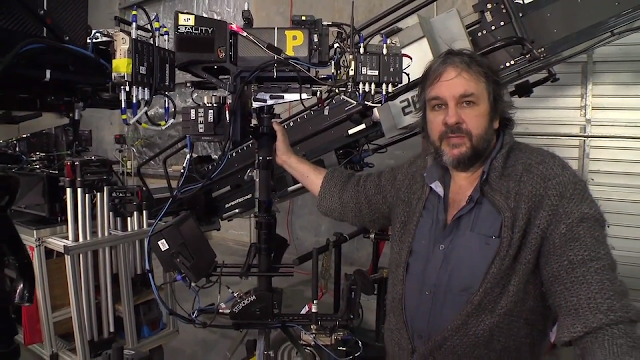 I believe Peter Jackson was very brave shooting in this format.  If you watch the film be prepared for it to look very different and maintain an open mind.  I think HFR alters the viewing experience at a far more fundamental level than 3D ever did, and so can understand the negative reaction to it.  We don't always like change.  Having said that I think it is a game changer where 3D never quite was, and since seeing The Hobbit this way it has given me an appetite for more.  Not just in the movie theatre either, while recently watching the BBC documentary Africa it struck me how phenomenal it would look it HFR.  In the end the success of this format will come down to audiences, but if the film industry becomes as insistent on it as they have with 3D, I think we will be become accustomed to it and won't ever want to go back.