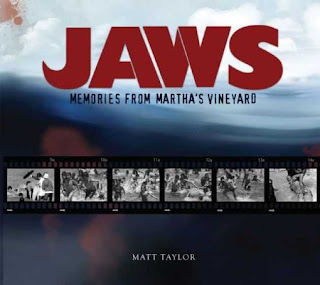 Its only fitting that one of the greatest movies of all time should also get one of the best behind the scenes books you can buy.  Jaws: Memories From Martha's Vineyard is packed with never-before-seen photos from the Jaws set, testimonies from movie staff and stories from the locals who actually made up a lot of the cast.

Author and huge Jaws fan Matt Taylor, along with Jim Beller, visited Martha's Vineyard where the classic was shot, to interview the locals and dig out their scrapbooks and newspaper clippings 35 years after the movie first hit the big screen.  This leads to some of the most fascinating and insightful stories of any behind the scenes book I have ever read.  For instance, most of the locals were over the moon to get a part in the movie. This was not so for one local, John Alley. 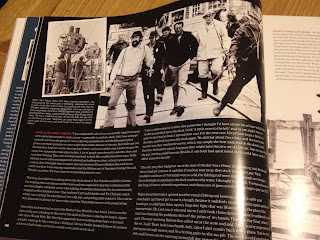 The first shot I did was walking down the dock ahead of Roy Scheider and Jeffrey Kramer.  I'm wearing these enormous rubber boots and was supposed to hop into a ridiculous little ten-foot dinghy while the actors were talking.  Somewhere about take five, I unintentionally stepped on Roy Scheider's foot.  They hollered 'Cut!' and Scheider said, 'For Chrissake, watch where you're going!'  By take fifteen I was cold, wet, and getting pretty tired of it.  They told me they planned on doing a lot more takes, and that I'd probably have to stick around all day.

After they had marched us up to the Harbor View Hotel for a hot lunch, I was in another shot, as the guy standing on the end of the dock as Dreyfuss is steering his boat in, supposedly from Woods Hole.  But Dreyfuss apparently knew nothing about boats, so he wasn't actually steering it.  It was a man [Jaws Technical Advisor Freddy Zendari] lying on his stomach with two little holes cut in the console so he could see the dock.

I was so damn tired of it all by that point that I thought I'd have a little bit of fun with him.  As the boat pulled up to the dock, I said 'A little more to the left,' and he ran right into a spile.  So they had to back it up and start over.  For the next one, I'd tell him to go a little to the right, and he'd run into the dock again.  We did that about five times, and the last take was the one they used in the movie, which was simply the boat stationed at the dock and Dreyfuss behind the wheel.  I suppose they might have thrown me off the set, but no one but the guy steering could hear me.  Besides, if anybody had questioned me, I could have said, 'I didn't mean that far left!'

The level of detail Matt Taylor and Jim Beller have gone into along with the amount of material they managed to get for Memories From Martha's Vineyard is second to none and raises the bar for this kind of book. There are 296 pages and every page has something new about Jaws that I did not know before.  From the making of Orca, to the casting of the crew, the book captures every process in the making of Jaws.  Nearly every page has a story from a local or part of the crew, and this leads to a book that really makes you feel you are on set at Martha's Vineyard or perhaps one of the locals taking the day off to watch the strange process of a movie being made.

"My father, Donald Poole, played the Amity harbormaster.  Although they served a full-blown lunch on the set every day, the old man took his dinner pail with him so he could sit in his pickup truck with his dog and have his regular lunch.  There was a young guy who'd come over after he got his lunch from the cafeteria line and eat with the old man in the truck.  He'd sit and ask him all kinds of questions about fishing and the Island. They did this day after day.  One day the old man asked my wife [Assistant Location Casting Director, Jini Poole], 'Who's that young guy who sits in the truck and has lunch with me every day?  He's a very nice fellow, and I have a good time talking to him.' Jini said, 'That's Steve Spielberg!' And so my father wound up having a very good relationship with the director without even knowing who he was!" 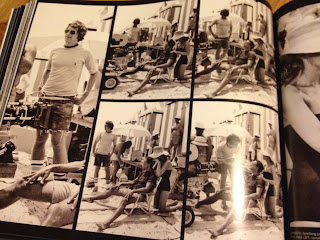 What I really like about this book, which sets it apart from other similar titles, is the local feel you get from reading the pages.  Interviews with the locals, newspaper clippings and insights from the crew all contribute.  Nothing is missed. Local politics threatening to delay the shoot, bad weather, the film studio getting in Spielberg's way and other problems.  Nothing is missed out.  This book will make you realise that however glamorous the movie world lifestyle may appear, it isn't always that way.  Jaws: Memories From Martha's Vineyard is a true pleasure to read and if you are a fan of Jaws, Spielberg or how a movie is made, then this book is a must.  Problem is now I expect every behind the scenes book to be as good as this one.

A Must buy.
Rob Wainfur
The Bearded Trio