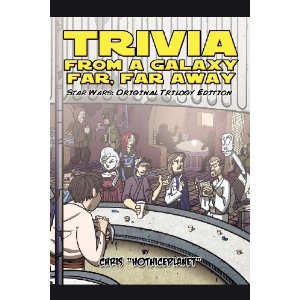 Question - What do most Star Wars trivia books and games have in common?  Answer - The questions.  They're either too hard or too easy.

A few months ago I had a Star Wars trivia night with a few mates.  Armed with Star Wars trivial pursuit I thought the evening would be a great success.  It was only a few questions in before I realised that this wasn't going to work.  The reason?  A number of things.  The people in the room had different levels of Star Wars knowledge.  There was me who is your Star Wars geek who knows about the expanded universe, the original trilogy and the prequels not to mention The Clone Wars animated series.  There were others who had knowledge of most of the above apart from the expanded universe.  Then there were others who only had knowledge of the original trilogy and not much of the prequels. Also some of the questions were simply awful.  For example this one had us in stitches.  "What is the name of the blue energy ball the Gungans used in The Phantom Menace?"  Answer - "Blue energy ball."  I kid you not! The questions were so inconsistent (The answer by the way is a Booma.)  Some of the questions were too easy, others ridiculously hard. In the end we gave up and popped on the Star Wars Blu-ray.  We felt disappointed about the quiz for two reasons.  One we were looking forward to a Star Wars quiz and secondly even though we were all Star Wars geeks it unfortunately showed the difference in our knowledge of the Star Wars universe which ultimately led to us moving away from the game and resorting to watching the movies to salvage the night.

Anyway, thank goodness for this new Star Wars trivia book, "Trivia From A Galaxy Far Far Away.  Star Wars: Original Trilogy." by Chris "Hothiceplanet" Smith.  The book brings 1138 questions (get it?) that are all about the movies.  No behind the scenes questions, no expanded universe questions and no questions about what was in the deleted scenes.  I just wish I was armed with this book on that afore mentioned night.  I've read the questions and every single one is balanced and would appeal to any Star Wars fan of any level.  The questions will make you think, make you smile and also make you go "oh yeah!"  For example, "According to Princess Leia's hologram, what was Obi-Wan's military rank?"  I love this book and Chris Hothiceplanet explains in the introduction that the questions are supposed to be aimed for friends, families and geeks alike to all have an equal chance of answering the questions.  Why hasn't this been done before?  The book is easy on the eye and simple to read.  172 pages of pure Star Wars fun.  I strongly recommend this trivia book and is an essential purchase for any Star Wars fan or family.    The author is planning two more books.  One on the prequel universe and one on the Clone Wars.  I can't wait and want them all.  The bar has now been raised on these kind of trivia books.  I just wish there were more books like this for other franchises like Star Trek, Stargate, Indiana Jones, Back To The Future, Jaws and more.

The book is available on Amazon at £15.95
Chris "Hothiceplanet" Smith hosts the fantastic Sarlacc Pit official podcast of GalacticBinder.com http://www.galacticbinder.com/ppodcast.html

You can read the interview we did a few months back with Chris "hothiceplanet" Smith here http://www.thebeardedtrio.com/2012/07/get-behind-this-project-new-star-wars.html