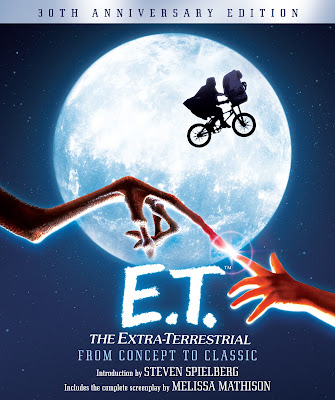 E.T. The Extra-Terrestrial  From Concept To Classic was first released in 2002 when the movie was celebrating its 20th anniversary.  Now Newmarket Press has released a 30th Anniversary edition which will sit nicely by your copy of the Blu-ray which is out in October.

192 glossy pages and an introduction by Steven Spielberg no less.  In fact we get to hear from Spielberg, writer Melissa Mathison and the cast and crew throughout the book.  The full screenplay is included in the book, along with script notes to give you that extra insight into the movie.  For example, did you know that Henry Thomas who played Elliott ad-libbed the scene where Elliott and E.T. play with the toys?

The book is separated into three main parts.  Part one of the book is titled From concept to classic and begins with the explanation of "Night Skies", an early draft about a farm family who are terrorised by gremlin-like extra terrestrials.  Spielberg felt after reading the draft that this was a movie he couldn't do, as it was too violent and went against his beliefs that aliens visiting the earth would not have bad intentions.  It was then that everything changed and he realised he was going to be making a very different movie.  Steven Spielberg explains how he was thinking of the concept during the making of Raiders of the Lost Ark:

"Sometime in 1979 or 1980, we were shooting Raiders of the Lost Ark in Tunisia and, during one of the long set ups, I was walking in the desert, picking up prehistoric sea shells, and trying to figure out how I could tell the story of this lonely boy.  At the time I was feeling kind of separate from myself, which often happens when you are directing.  You go into a kind of fugue state to make a movie.  So I was in one of these states of mind when, bang, this concept hit me and the story began to flood into my mind.  For the next couple of days during the shooting of Raiders, the bones of the story began to fall into place."

The book also mentions how the first draft of E.T. by Melissa Mathison was almost perfect, and Spielberg mentions after reading the draft how he could have easily filmed the movie tomorrow.  A rare thing after reading a draft he says.

Part two is called A Boy's Life:  The Annotated, Illustrated Screenplay.  As mentioned, this part of the book includes the full screenplay.  If you are writing a screenplay or are thinking of writing one, then reading the E.T. screenplay will give you some great tips and insight.  Scenes are not over described and the dialogue flows.  For example, in the scene where E.T. and Elliott attempt to communicate with E.T.'s own kind using a Speak & Spell, look at how simple the dialogue is and how uncluttered the script is:

The string pulls the fork, which pulls the sawblade, which activates the Speak & Spell, which is writing once again the strange characters,

ELLIOTT
E.T., it's working! Its working!

ELLIOTT
You did it!

They both look to the sky in anticipation, hoping for some word in return

The third and final part of the book is called Postproduction and Beyond, and begins with ILM (Industrial Light & Magic) explaining the involvement in the movie, and also goes into detail about the spaceship.  The book tells us that originally the spaceship was going to be saucer shaped, but the ship's shape we all know is thanks to the legendary Ralph Mcquarrie,who decided to shape it like a diving bell.  This shape was used because according to Spielberg, the aliens originated from a moist planet.  The bottom of the ship was encrusted with barnacles.

Every page has some interesting behind the scenes information, and even if you are the biggest E.T. fan you will find something in this book you didn't know before.  Its well laid out and extremely easy to read.  I found ET From Concept to Classic to be one of the better behind the scenes books, and will make an excellent addition to any Spielberg, E.T. or movie fan's collection.