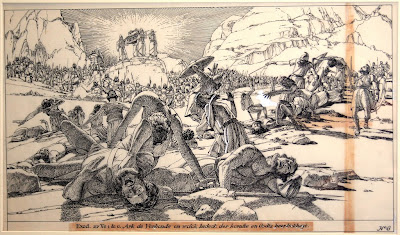 This image is Ralph McQuarrie's only contribution to the film Raiders of the Lost Ark. This pen drawing depicting the power of the Ark was used to create the illustration for the prop bible in the film. For the figures in the foreground, he took reference photos of several ILM employees. The staining on the right is where the oversized image was taped together, and no, the text on the page doesn't actually translate into anything. At the time it was created, Ralph never could have imagined that people might someday have the opportunity to stand within inches of the drawing to actually try and read it.
Seen at A Gallery of Imagination: The Star Wars Art of Ralph McQuarrie at Celebration V.