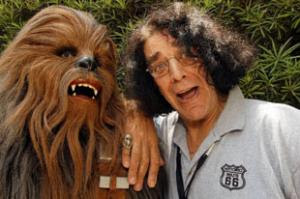 THE BRITISH actor who played Chewbacca in the Star Wars films will be in Newport next weekend for his first ever visit to Wales.
Peter Mayhew, who played the Wookie Chewbacca in four Star Wars movies, will appear at the annual Star Wars and Sci-Fi collectors fair in Newport Leisure Centre on July 6.
Mr Mayhew, who stands at 7 foot 3 inches tall, will be joined by a number of other stars from the films, including Mike Carter who played Bib Fortuna, Mike Edmonds who was Ewok Logray, and John Coppinger who appeared as Wookie Senator.
All the actors will meet and sign autographs for fans at the fair, and have the opportunity to have their photograph taken with R2-D2.
Steve Rogers, who was helped organise the event, said: “This is a big deal for the fans.
“The biggest stars from the films were all based in America, so fans over here don’t often get to meet them. They’ll be looking forward to welcoming Peter Mayhew who will be in Wales for the first time.”
Mr Mayhew was born in England, but now lives in Texas.
The fair next Saturday will be open between 11.30am and 3.30pm, with 50 traders offering sci-fi merchandise.
Entry will be free for people who turn up in costume.