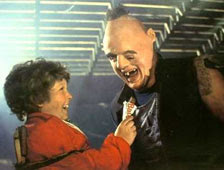 Goonies Remake On The Way?

We've been hearing about a "Goonies" remake for a while, one that would focus on the kids of the original characters. And during a press junket for "Percy Jackson and the Olympians," director Chris Columbus confirmed that he and Steven Spielberg have been working on ideas.

"I'd love to see another Goonies movie out there," said Columbus. "The kids would have to be the parents, and their kids would be the Goonies. We just need something, as Steven [Spielberg] said the other day, he said, 'How do you beat finding an entire pirate ship filled with treasure underground? What can be as exciting?' So we have to come up with something that can be equally as exciting. What can be the next adventure?"

Unfortunately, until there is a story, the "Goonies" remake is nothing more than just wishful thinking. "I'm not working on it," added Columbus. "Everybody is coming to me asking if I have an idea - but no, not yet."