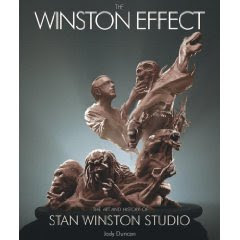 The Wnston Effect: A book on the legend that was Stan Winston

For Christmas I was delighted to have received a signed copied of The Stan Winston Effect. I could not put the book down. A wonderfully insightful and well-written, the book starts obviously at the beginning of Winston's career mentioning Gargoyles a 1972 TV movie.

Winston was straight out of apprenticeship but he had no reservations about challenging the producers regarding crediting the make-up artists in the credits, a practice that was not the norm in the movie industry at that time.

Gargoyles was his first job in TV and although Winston only worked on the background artists, he along with his artist colleges won an Emmy award. An award that would have not happened had Winston not insisted on the inclusion of the make-up artists in the credits as you can only be nominated if you are credited.

The book is wonderfully illustrated and well laid out. If you have some Christmas money to spend you won't go far wrong with this gem. If you can, try to get the signed copy limited to three thousand copies. Stan Winston died on June 15, 2008, in Malibu, California after suffering for seven years from multiple myeloma. The book was published before his unfortunate death. A huge talent.  He will be missed by the Movie Industry, friends, family and Fans all over the world.