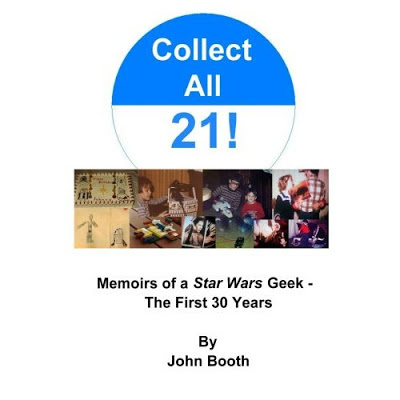 Get Ready For A Trip Down Star Wars Memory Lane

If like me you are in your thirties then chances are you remember the first time you went to see Star Wars when it was released back in 1977. I do. It was the opening week and my Brother took me to see the film that changed Cinema forever. I was five years old. The film had created such a buzz that when we arrived at the cinema the queue was right around the building. I remember we waited in line for two hours, yes two hours! Strange thing is I don't remember anything about watching the film (I have seen the film so many times that my other memories have overwritten that part) but I do remember asking my Brother to hum the theme tune to me on the bus ride home in which he did in front of people. From that point on I was hooked and that moment in my life is what turned me into the Sci-fi geek I am today and proud if it. Also from that point I started collecting Star Wars toys in particular the kenner figures and ships and I still do. A few years back I joined rebelscum forum, a forum for Star Wars collectors. It was there that I learnt about this fantastic book.

Collect All 21! Memoirs of a Star Wars Geek - The First 30 Years by John Booth
It is an absolute must read if you are a collector, a retro fan or if you remember the first time you unpacked that Boba Fett. There are some fantastic memories from the author such as the first time he watched Star Wars, seeing a blue snaggletooth for the first time in a library and missing the first ten minutes of Empire Strikes Back. This book is full of gems that will bring back memories. I had to laugh at this one story he brings up...

Remember the final duel in Return of the Jedi, when Luke lets his anger get the best of him and he just wails on Vader and then cuts his hand off, and then looks at his own black-gloved hand with the realization of what he could become? I'd forgotten that he'd put that glove on after getting shot in the hand on Tatooine. and the first time I saw that movie, I thought somehow that Vader's limb had actually grown onto Luke's arm, an actual physical transformation instead of the metaphor that was suggested.

I actually thought that too when Return of the Jedi was released. I had forgotten that. Its memories like that, that this book will bring back to the surface. I highly recommend this book.  Its a fantastic read that is bursting with Star Wars nostalgia. My only criticism is that there's not enough. I want a sequel. Buy this book, you wont be disappointed.
Click here for John Booth's Blog