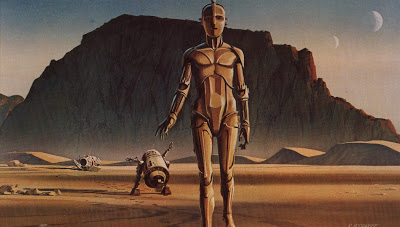 This painting represents R2-D2 and C-3PO first arriving on Tatooine after their narrow escape from the Imperial Stormtroopers via a Life Pod (which can be seen in the background). McQuarrie used a photograph of the Oregon coast to guide his painting of the landscape, following the line of the cliff and replacing the ocean with sand dunes.

C-3PO was inspired by the beautiful robot seen in Fritz Lang's classic silent film, Metropolis but George Lucas wanted it to look more male than female. McQuarrie's C-3PO looks much more graceful and slim than the 'droid was to become in the film. The problems of a person moving in all of that equipment made it necessary for C-3PO's body to be bigger and to have larger joints.

Lucas wanted R2-D2 to be like a small tripod which would move by throwing one leg outward and pitching itself forward like a man on crutches. but the problems of getting R2-D2 to move in that manner couldn't be solved, so he had to be made to glide forward or hobble about.