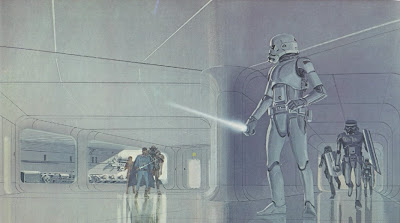 Here we have an incipient confrontation as the small group of fugitives try to escape the Imperial Stormtroopers.

Chewbacca is carrying the Princess; a bearded Han Solo can be seen in an earlier costume design - a blue outfit with a cape; and Luke is in the background. McQuarrie envisioned the hallways as being lit indirectly, through thin slots. Defying standard principles, the light would radiate from these narrow spaces at 360 degrees, while the slots themselves would be detectable only from particular angles. It would be a testament to the genious of these people that they discovered a key to the universe that permitted them to harness an incredible energy in this manner.