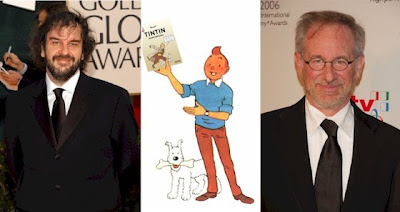 The Adventures of Tin Tin The Secret Of The Unicorn

a 2011 motion capture 3-D film based on The Adventures of Tintin, a series of comic books created by Belgian artist Georges "Hergé" Remi. It will be the first animated film directed by Steven Spielberg and the script is based on three of the stories; The Crab with the Golden Claws, The Secret of the Unicorn and Red Rackham's Treasure.

Spielberg first acquired rights to Tintin after Hergé's death in 1983, and re-optioned them in 2002. Filming was due to begin in October 2008 for a 2010 release, but was delayed to 2011 after Universal opted out of producing the film with Paramount, who provided $30 million on pre-production. Sony chose to co-produce the films. The delay resulted in Thomas Sangster, who had been cast as Tintin, departing from the project. Producer Peter Jackson, whose company Weta Digital is providing the animation, intends to direct a sequel. Spielberg and Jackson also hope to co-direct a third film.

The film is currently in post-production.