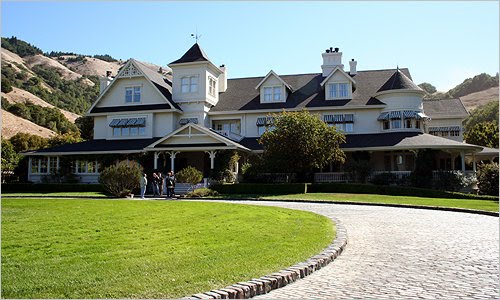 The Marin County Fire Department received a call at 1:52 p.m. on Thursday, Aug. 13, that a fire had started at the Banta House, an adjacent estate once owned by the Doobie Brothers, where a wedding was scheduled to take place two days later, said Battalion Chief Tim Thompson, who directed the department’s operations that day.

Mr. Thompson said the fire, which was burning roughly three acres across, spread up a steep hill to the border of Mr. Lucas’ ranch about an hour after it had started.

“This was a very tough fire,” he said. “There was some complexity to it.”

Indeed, Mr. Thompson said it took more than two hours to put out, with about 70 firefighters, two inmate crews, two bulldozers and two air tankers battling the blaze (alas, no Ewoks were available). Skywalker Ranch has its own fire brigade, which also responded to the call.

Mr. Thompson said a small portion of the ranch was damaged during the incident.
But Lynne Hale, a spokeswoman for Lucasfilm, said there wasn’t any damage to the property.
“We were very relieved,” she said.