The Bearded Trio: About Us 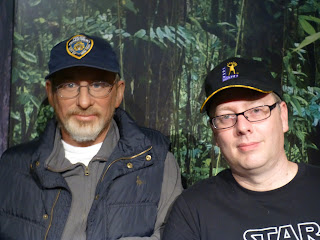 Rob Wainfur
My first memory was going to see Star Wars with my late brother when I was only 5 years old. That experience changed my life. Since then I have and always will be a sci-fi geek. I have always been a fan of the big three in movies. George Lucas, Steven Spielberg and of course John Williams.

Everything Spielberg is the best way to describe how much of a fan I am of the director. Although a number of movies stand out for me. Jaws, Close Encounters of the Third Kind and Raiders of the Lost Ark are in my top five movies.

I also love gaming and that moment I fired up Monkey Island on my Amiga I will never forget. Since then I have played every title from Lucasarts and miss them very much.

This blog is my way to say thank you for giving me so much enjoyment over the years and its a great way to keep in touch with the latest news.

My wife is the best and even helps from time to time and never objects to the vintage Star Wars collection in the "geek" room. We are also TV extras in our spare time and appeared in a number of English and Welsh TV programmes.

I have done a number of reviews for books and other related items and last year attended Star Trek London as a member of the press. I was lucky enough to interview Michael J. Fox at London Film & Comic Con.

Brad Monastiere
One of my first memories was seeing Star Wars: A New Hope in the theater in suburban Detroit, 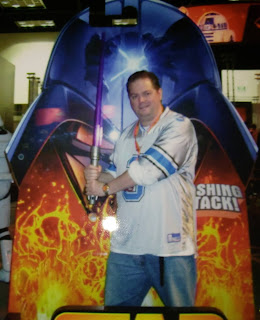 Michigan when I was 4-years-old. Ever since then, I have been endlessly fascinated by the music of John Williams, the stories of Luke Skywalker, Darth Vader, and all those that occupy their universe. Star Wars is a gift that has given me so much over the years. I only hope my work on this wonderful website can offer a thank you and as a way to express how I see these films, characters, and the brilliant people behind their creation. George Lucas had the vision, guts and determination to put on screen, the greatest story ever told.

In 1981, Star Wars made room in my fan heart for Indiana Jones. Harrison Ford was the open window through which I watched the character, but it was the name Steven Spielberg, so closely attached with the project, that brought me on board with the most popular and successful filmmaker in cinema history. Spielberg's evolution as a director and a human being, has been on full display for us over decades, and I count myself as fortunate to have stuck around for his works in the world of science fiction, fantasy, history and mankind.

After seeing the Empire Strikes Back, I received the double record album as a gift. This was my introduction into the singular genius of John Williams, It was the first time I linked a composer with music. I wore out that record album, swept into a world of music unlike anything before or since. For the past 40 years, the work of John Williams has gotten me through hard times, helped me celebrate good times, and truly been a soundtrack to my life.

I hope my contributions to this website can help others celebrate the works of these three men, and can bring the same kind of joy to others that they've brought to me for so many years. 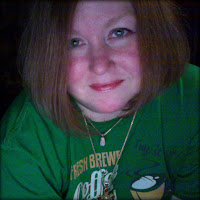 Lisa Dullard
My name is Lisa and I first saw Star Wars in 1977 when I was 8 years old. It had a big impact on

my life! Other girls played with Barbie dolls, while I played with Star Wars action figures and play sets. Hey, I still do!

It wasn’t only Star Wars that impacted my formative years, though. Jaws, E.T., Indiana Jones… All were part of my childhood. I’m a geek today thanks in great measure to George Lucas and Steven Spielberg. Of course, every fan knows you can’t experience the genius of those men without a rousing soundtrack by John Williams! They’re an essential (bearded) trio. 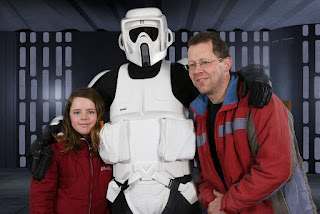 Ronny Delsink
Hi, I’m Ronny, and I’m from the Netherlands. Spielberg and Williams first came into my life in December 1975, with the release of Jaws. Hard to believe nowadays, but back then, waiting half a year for a film that broke every record in the US, was fairly common. However, the film definitely was worth the wait. Jaws turned out to be the first film I desperately wanted to see again, after my first viewing and so in the first couple of weeks I managed to watch it 5 times, well, not entirely, because after the first viewing  the scene where Hooper discovers Ben Gardner’s remains, this
sequence scared me so much that I decided to turn away my head at the other viewings, thus seeing an entire audience jump out of its seat (so at least  I knew I wasn’t the only one getting the jitters).
After Jaws, came Star Wars, which was fun, but when I saw Close Encounters of the Third Kind, I knew I had witnessed the film that was made for me and I started to get interested in Spielberg and Williams (and with slightly less enthusiasm Lucas) by reading and collecting as much as I could about them and the films (and later also the TV-programs)  they had worked on.

At the end of the eighties I met a fellow enthusiast (well, he was more into Star Wars, but I never blamed him for that) and  together we ran a Dutch Spielberg and Lucas Fan club (called Dutch Amblin and Lucasfilm Fan Association, we later changed the meaning of the D for DreamWorks of course. ) for almost 10 years, until we ran out of time (because we both started families, and had to change our priorities). Early 1994 we went to Amsterdam together, because Steven would attend the premiere of Schindler’s List. We had tickets to the screening, but not to the rest of his daytime program, so we figured out where he would go and try to visit the same places and imagine standing on the same spot he had, earlier that day. We had the day of our lives. We weren’t able to talk to him, but a couple of years later I did get a chance to talk to, Richard Zanuck, when Deep Impact came out, so for me the circle was complete.

My interest in Spielberg, Lucas and Williams never faded over the years, merely my choice on what to try and collect, so when I was approached to contribute to The Bearded Trio, I jumped at the occasion.

PS: I even named my daughter Jillian, after one of the leading characters of my favorite film (what else could I do?) 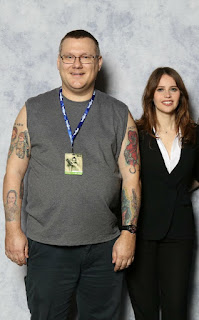 Dan Dudych
Dan is one who can say he was alive when the original “Star Wars” came out back in 1977. Aside
from SW, other favorite films include: John Carpenter’s “The Thing”, “Clue”, “Tombstone”, & “Trick ‘r Treat” to name a few. Favorite T.V. shows are: “The Boys” on Amazon, “Penny Dreadful: City of Angels” on Showtime, and of course, “The Mandalorian” on Disney+. When not watching television or movies, he practices martial arts as he is a 2nd degree black belt in Taekwondo, is a special-effects make-up artist, is starting out in voice-over work, and has numerous tattoos. Dan also likes to attend various conventions throughout the U.S. during the year as he is an avid autograph collector. His family consists of a 5-year-old English Bulldog named Holly.

Patreon Contributors
Douglas Meacham is a huge Spielberg fan and of course loves the music of John Williams.  We are delighted to have fans such as Douglas reading our pages who said "I have to say your page is one of the few at the top of my news feed and I enjoy your posts."  Thanks Douglas, your kind words make this all worth while. - Rob