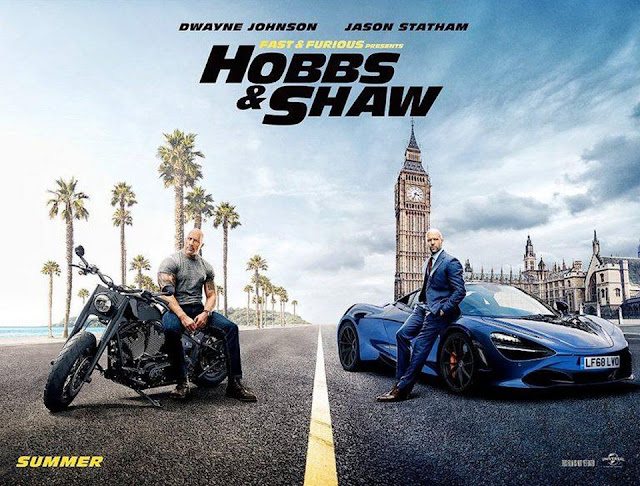 The movie opens with an action sequence (surprise!) as a crew of MI6 agents, led by Hattie Shaw (Vanessa Kirby), enters the warehouse of mysterious group called and attempts to take a virus capsule inside. At this point, Idris Elba shows up, and when Hattie asks him "Who are you?" he simply replies 'Bad guy." That, in a nutshell, is the entire approach to plotting and exposition in the world of Fast &Furious. But Elba isn't just a bad guy, he's literally a super bad guy, a rogue operative with highly advanced technology that grants him superhuman abilities ("I'm black Superman!". He kills the crew, except for Hattie, who injects herself in order to keep the virus from Bad Guy, and promptly escapes. She is then framed by Bad Guy for committing both the murders and the theft of the deadly MacGuffin Virus.
Luke Hobbs (Dwayne Johnson) and  Hattie brother, Deckard Shaw (Jason Statham) are brought together by the CIA to find Hattie. Our heroes are angry at the prospect of working together, but if they can put their difference aside long and stop trading grade school insults and making endless references to their own genitals (and each others) long enough to secrete enough dumb testosterone to turn the entire island of Themyscira into monster truck rally, they may be the best chance we've got, dammit.
This an action flick that seems to be setting out to make the films of John Wood look smart by comparison, and frankly it almost succeeds. The plotting is both paper thin and perplexing at the same time, and most of the dialogue quite weak (if not as laughably maudlin as Vin Diesel's "Family is family, and that's why you all are like family to me and my family" speeches tend to make some of the other entries in the franchise).
The upside is that the film has four strong assets in its favor: Johnson and Statham, who are hardly great actors but know how to work this kind of movie with the best of them; Vanessa Kirby, who is fresh off of Mission: Impossible Fallout and may well be the next Catwoman, and most of all, director David Leitch (Deadpool 2, Atomic Blonde and uncredited co-drector of the original John Wick) who quite frankly is the new John Woo (in a good way). Leitch (a former stuntman) can stage elaborate, jaw dropping action with the best, and can make the thinnest of material watchable.


The movie easily coasts on mayhem and machismo (though the latter is laid on thicker than it needs to be and may cause you to roll your eyes back so far that you can actually see your own brain, and if that happens, don't be alarmed if it looks dead, it's only sleeping). But it's genuinely fun much of the way, and after John Work 3: Parabellum and Once Upon A Time . . . In Hollywood, it's nice to have some outrageous action that isn't graphically bloody (though even Parabellum buried this in terms of storytelling).
Johnson the movie star is better when he's playing up the nice guy angle (or even the earnest hero) than when he is trying to over milk one liners, whereas as Statham can be great when he's being silly but gets a bit tedious when he's trying to take it too seriously. The result is that they compliment each other pretty well, and Kirby provides a good counterweight. But no matter how unpopular it is to say this, Idris Elba lit up the screen in The Dark Tower (even if almost nothing else about the film worked), and Hollywood needs to stop wasting him in forgettable villain roles.
There is plenty of room to complain about what's wrong with this movie, but the fact that it's silly is not one of them. Feel free to say that it's too fast but not nearly furious enough. You might assert that it would have been better with more Hobbs and Shaw. But it's important to go into this one with very specific expectations, and if sit through a Fast & Furious picture complaining about how this could never happen in real life, you are even stupider than the movie itself. This is absolutely meant to be turn of your brain, razzle dazzle fun and it achieves that goal. But it absolutely could have been better turn of your brain, razzle dazzle fun with a little more care put into the script and basically development of the story.