Movie review: "Once Upon A Time . . ." Is A Mesmerizing Fairy Tale 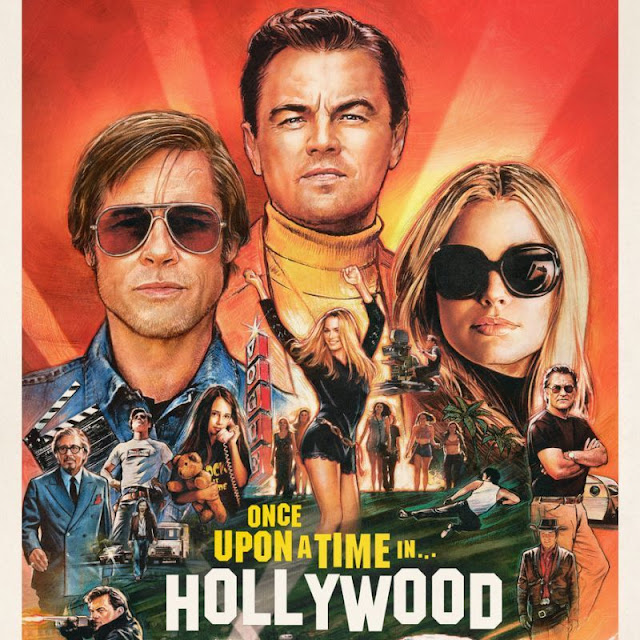 
Written and Directed by Quentin Tarantino

25 years ago, Quentin Tarantino (already a rising star thanks to Reservoir Dogs) shook up Hollywood with Pulp Fiction, a bold, inventive and unapologetic, super violent film noir celebration of the '70's. In the past two and a half decades,Tarantino has brought his distinctive style into other time periods (even if the '70's have hung over each one of those films). In his ninth feature, Once Upon A Time . . . In Hollywood, he takes us to back to just one year prior, in 1969, a turning point for pop culture, and the year a set of very shocking killings rattled Los Angeles and the world, and made the name Charles Manson a synonym for evil.

The story follows actor Rick Dalton (Leonardo DiCaprio), the former star of the 1950s western television series Bounty Law, who finds his career faltering now that the series has ended. Rick laments to Cliff Booth (Brad Pitt), his best friend and stunt double, that his career is over. Cliff, a war veteran who lives in a derelict trailer next to a drive-in theater in Van Nuys with his pit bull, Brandy, attempts to bolster Rick's self-confidence. Meanwhile, actress Sharon Tate (Margot Robbie) and her husband Roman Polanski have just moved into the home next door to Rick's.
While some may find the movie slow to get going, Robert Richardson's gorgeous cinematography and the performances of DiCaprio and Pitt had me hooked from the first frame. This is a terrific return to form for Tarantino after the hit and miss Django Unchained and the bloated and boring The Hateful Eight. While the film deals heavily with the angst and disappointment of middle age, it also has a sense of joy a wonder as Tarantino lovingly weaves a tapestry the captures the end of an era, and the leisurely pace of the film mirrors the cool, confident pace of Cliff diving Rick (and the rest of us) through Los Angeles in his convertible, and it's strangely mesmerising.

DiCaprio is one of the finest and most dedicated actors working in film today, and Rick Dalton ranks up there with his very best work, as Rick's passions, insecurities, ego and alcoholism make for a life and career that is a roller coaster, filled with extreme ups and downs. Pitt is almost as good, giving Cliff a smooth swagger that seems like a perfect melding of Aldo Raine from Inglorious Basterds and Rusty from Ocean's Eleven.  The supporting cast, which includes such greats as Al Pacino and Kurt Russell, are pure perfection, but the film is nearly stolen by two enchanting women: Margot Robbie and Julia Butters.


Butters portrays Trudi, a, 8-year old actor (not an actress, as she rejects the term) who not only shares not only a scene with Rick, but shares a surprising wisdom and dedication to the craft that inspires him. It's a performance that is going to be talked about a lot, especially as we get closer to awards season, and Butters may be the next Dakota Fanning (who ironically appears in this film herself). Robbie's portrayal of Sharon Tate is enchanting, and for all the talk about whether or not she had too little dialogue, it's her face that matters. it's easy to dismiss Robbie as a pretty face and a perfect body, but if the eyes are truly the window to the soul, she has an ability to put her character's souls right up there on screen in a way that is almost startling, and that is why Sharon Tate is so easy to fall in love with as vibrant, real person.

The tricky element of Once Upon A Time . . . In Hollywood is the finale. For those who have not seen the film (thought I suspect most have heard rumblings) I will not spoil anything, but it's impossible to review the movie without touching on it. So, if you are totally in the dark about where the movie goes and want to stay that way, you've been warned. The over the top, shocking violence that one expects from Tarantino is all saved for the final half hour, and it's a doozy of a half hour. in some ways it works very well, in others, it's very questionable, and I may never fully sort out my feelings on the choice the auteur made with this story. If you want to read further about it, Owen Glieberman's article for Variety sums it up nicely. I may have liked the ending better than he did, but I can't disagree with a single word he writes on the problematic choice.

On the whole, Once Upon A Time . . . In Hollywood is easily one of the most involving and entertaining films of the summer, and one of the director's very best cinematic achievements. But there are lingering questions and misgivings that are hard to shake.
The Bearded Trio - The Site For Steven Spielberg, George Lucas, John Williams and a whole lot more.