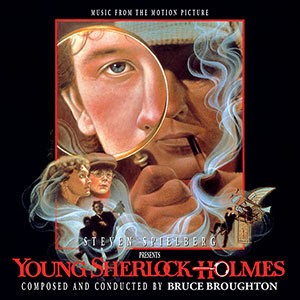 Soundtrack collectors always look forward to another Intrada announcement and this one will please Steven Spielberg fans.  Young Sherlock Holmes (1985) had Steven Spielberg as the executive producer and ILM fans will remember the movie for the memorable stain-glass knight special effect.  The soundtrack was composed by Bruce Broughton and is a must for any Spielberg collector.  Here's the press release:

Intrada revisits one of its most popular titles this week – Bruce Broughton's score to the 1985 Paramount Pictures film Young Sherlock Holmes. Previously released in 2014 working from the only available elements at that time, this updated version is sourced from the recently discovered film mix created by Eric Tomlinson as well as the original LP master. From these elements Intrada has expanded from the original 2-CD release to this deluxe, 3-CD package which includes the complete score from the Tomlinson mixes as well as additional extras, including the alternate "It's You," and of course the complete LP program as originally assembled by Broughton in 1985.

Broughton was relatively new to the theatrical side of the business when he was tapped to score Young Sherlock Holmes, having worked mostly in television for the first decade of his career. Director Barry Levinson’s kinetic film, with its fluid pace and wide variety of tones, presented him with a fresh, yet daunting challenge. Broughton rose to the occasion with a stunning, wall-to-wall symphonic work that made a deep impression on soundtrack fans and industry professionals alike, earning a Grammy nomination for Best Instrumental Composition and winning a Saturn Award for Best Music from the Academy of Science Fiction, Fantasy & Horror Films.

The original MCA Records soundtrack album, released on LP and cassette, received high marks in Billboard, who praised it as “a traditional orchestral score, which Broughton infuses with both dash and sweetness.” Remarkably, however, the MCA album never made the transition to a commercial CD. It wasn't until the 2014 release that Intrada was able to include a great deal of outstanding material that did not appear on that album, albeit remixed from the original 24-track elements, making it a challenge to match the mix of which fans had become so familiar over the years.

Young Sherlock Holmes was the brainchild of three primary parents: writer Chris Columbus, executive producer Steven Spielberg and director Barry Levinson.The central premise of Young Sherlock Holmes suggests that Holmes and Watson did not first meet as adults in a chemical laboratory at St. Bartholomew’s Hospital, but as adolescents. In the story, a series of baffling murders puts young Holmes on the trail of an Egyptian cult practicing human sacrifice in the bowels of London. Dismissed by the police and maligned by his peers, the budding detective sets out with only a few close allies to unravel the plot—culminating in a fiery confrontation with an evil mastermind, bent on revenge.