Movie Review: Audiences Have A Friend in 'Toy Story 4" 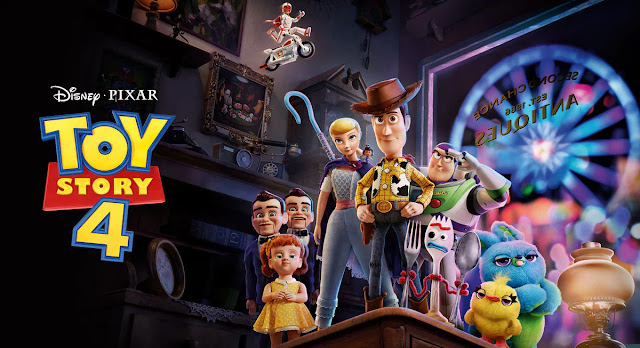 
The Toy Story trilogy ranks among the greatest film trilogies of all time, right up there with the original Star Wars, The Lord of the Rings and the Planet of the Apes prequels. It's the perhaps the ultimate case of taking the risk or ruining the legacy of a perfect, beloved film and instead just setting it in stone forever. But sustaining that into a fourth film? That seemed like too much to hope for anyone. Well, almost anyone.


After the events of Toy Story 3, Woody, Buzz and the rest of the toys are faced with a problem when Bonnie starts Kindergarten, and comes home with Forky (voiced by Tony Hale of Arrested Development and Veep), a new toy she created during arts and crafts. Forky suffers from an existential crisis, unable to accept that his purpose in life has changed from disposable utensil to toy. As Bonnie and her family go on a road trip, Forky decides to escape, and Woody goes to save him, running into a old friend along the way.

Toy Story 4 is an adventure on a grand scale (at least for small scale characters), and takes the toys into new territory and expands their world while keeping a firm grasp on the intimate elements that are so crucial to making these movies work. The family road trip vacation is a major event in a child's life and the toys you take with you define it as much as much as the places you go and the things you see: They are the adventurers travelling to exciting realms heretofore unknown to toy kind, and it's hard to overstate how strong an idea it was to explore this chapter in a toy's existence.


It's not just funny, it's uproariously funny and we both literally almost blacked out from laughing so hard. It's also (surprise) poignant and touching, in the best Toy Story tradition. These films tug and your heartstrings without ever getting manipulative or melodramatic. The emotion of Toy Story has always been about the innocence of the perfect, safe world of an idyllic childhood mixing with growth and realizations that we all face at some point in our lives. And without giving anything away, we will say that this one takes a bold and unexpected leap into new and grown up territory, while still managing to keep its footing. We can't promise that you personally will cry at Toy Story 4, but the vast majority of people who love these characters will most certainly be swept up in a wave of emotion.

As is usually the case with Toy Story, Woody is front and center here, and he is the character whose point of view we follow and it's all about his journey. The combination of the animators work and Tom Hanks' skill combined with his inherent likability has made Woody one of the most lovable characters in movie history for nearly 25 years; he's the Kermit the Frog of cowboy dolls. There are many stand out supporting characters and performances, including Annie Potts returning a Bo Peep, Tony Hale's outrageous and endearing Forky, and Christina Hendricks as the complex antagonist, a doll named Gabby Gabby. Then of course there's Jodran Peele and Keegan-Michael Key, who are sidesplittingly goofy as carnival toys Bunny and Duck, respectively, and there is the much touted turn by biggest star of the moment Keanu Reeves as Duke Kaboom (the Canadian Evel Knieval). Reeves is terrific and is clearly having a lot of fun, and it's a refreshing change of pace. For a guy who is up reportedly up there with Hanks for his famous big hearted hearted good guy lovabilty in an industry known for cutthroats and phonies, Keanu very rarely gets to show much of that in the characters he plays on screen, and it's delightful here.


But perhaps the biggest laughs come from Jeff Garlin and Kristen Schaal as Buttercup the unicorn and Trixie the triceratops, who were introduced to us in Toy Story 3. We won't go into any detail, but it was particularly great to see Garlin get a chance to shine so brightly. Fans may feel a bit frustrated that some of the longstanding characters are pushed a bit into the background, but that is inevitable with this many great characters. Buzz Lightyear still reminds us that we not still don't hate Tim Allen, he can be a very welcome presence in the right role (even if that only happens every ten years at a maximum).

If pure unbridled fun had a musical score, it would be composed by Randy Newman. While Newman's work here stays in familiar territory, it's simply wonderful, and the movie features some catchy new songs. None of them pack the emotional guy punch of I Will Go Sailing No More or When Somebody Loved Me, but they aren't meant to do so. Director Josh Cooley and screenwriters Stephany Folsom and Andrew Stanton keep the most emotional moments in the film more dialogue and imagery oriented, and it's the right choice for this particular instalment. The movie also has a great but understated touch of feminism to it, from Bonnie making Jessie the new Sheriff to the portrayal of the free spirited and strong Bo Peep.

In a summer where every blockbuster since Avengers: Endgame has been a disappointment on some level, Toy Story 4 really gets us back on track, and even if we didn't have Tom Holland's Spider-Man swinging into theaters again the following week, this would be more than enough to keep audiences happy for a while. It's a glorious and heartfelt adventure that will rank among the best films of the year and is easily Pixar's best since Inside Out. Do yourself a favor and treat yourself (and your kids) to this movie as soon as possible.