Movie Review: No Neuralyzers Are Needed To Forget "Men in Black: International" 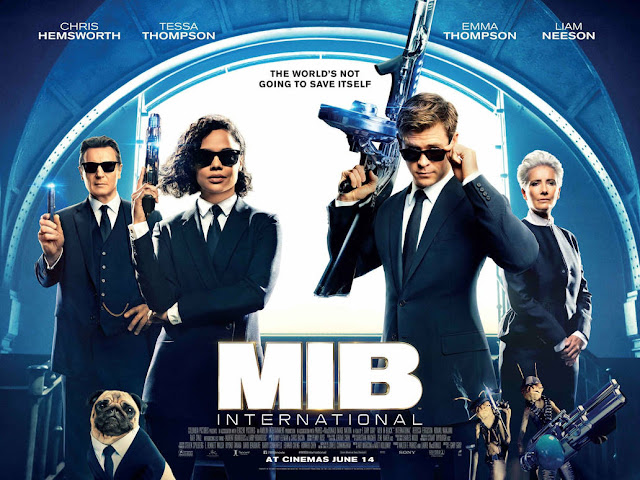 Let's start of by admitting that nobody was exactly clamoring for a Men in Black reboot. While the original film is 22 years old, 'the two sequels were spread out enough (with the third film released in 2012) to help prevent the franchise from getting too much traction from this decade's transition from '80s to '90s nostalgia. In addition, while amusingly bizarre, the MiB universe was never fleshed out enough to become a major fan preoccupation, and the series was very dependent on the comic chemistry between leads Tommy Lee Jones and Will Smith. But in an age where no franchise will ever again be allowed to just fade away, a reboot was inevitable.

In the case of Men in Black International, Sony Pictures and Amblin Entertainment have chosen the road of the soft reboot, more along the lines of Jurassic World than Batman Begins. The new film takes place within the original continuity, shifting to new characters (with the sole hold over from the original trilogy being an extended cameo from Emma Thompson's O, who appeared in the third movie) and a new setting, taking place in the British branch of MiB. In a series based around aliens from all over the universe it's difficult to get excited about the U,K. as an exotic change of scenery, but whatever. We're with it so far. And daunting a task as replacing Jones and Smith is, Chris Hemsworth and Tessa Thompson aren't bad choices. The two displayed plenty of comic chemistry of their own in one of the funniest Marvel movies, Thor: Ragnarok. And we certainly wouldn't want a rehash of the grumpy veteran/hip, wisecracking young guy dynamic. The problem is that Men in Black International fails to establish strong comic personae of any kind for its charismatic stars, leaving a film that's mildly entertaining in its way but disappointingly short on laughs most of the way.

Part of the problem may have been the choice of director. Original helmer Barry Sonnenfeld fell out of favor with many after the debacle of 1999's Wild Wild West, but he brought both a stylish visual approach and a quirky comic sensibility that perfectly suited the material. The new film is guided by F. Gary Gray, a solidly competent director who has a filmography full of decent but unexceptional titles like The Negotiator and The Italian Job, but broke out a few years back with the smash Straight Out of Compton. His stylistic playbook here is straight out of Sonnenfeld, with everything from production design to color temperature seemingly designed to fit seamlessly with the earlier films. But that quirky comic sensibility just isn't there, despite the best efforts of a talented cast.

Hemsworth does his best with the thinly written Agent H, a washed up hotshot who has lost his groove but not his cocky attitude, and Thompson is engaging in the potentially intriguing but underdeveloped role of newcomer Agent M, who has spent her life trying to unravel the mystery of aliens and Men in Black after a life-changing childhood encounter. But there's no hook to the relationship, no central difference or conflict to make the sparks fly. Once or twice there's a mild hint that the filmmakers see potential for a romantic relationship between them, but that's left largely unexplored. It's a shame that potentially strong duo is left here with not enough to work with to create a memorable character dynamic. And the supporting cast, which also includes Liam Neeson as London MiB boss/H's mentor Hight T, is given even less to do. The fundamental  problem here in that this was a star driven franchise to begin with, and the premise dictates that it must be. In order to become one of the Men in Black, a person surrenders their identity and connections to the outside world. In the original trilogy. Smith and Jones played off of their big big screen personas, and the half the fun of it was in seeing Sam Gerard and The Fresh Prince as partners fighting aliens. Here. Hemsworth and Thompson are being asked to consciously play against type lest we be distracted by thinking of them as Thor and Valkyrie. Thompson at least gets to be Molly, an woman who becomes obsessed with aliens ever since she had a close encounter as a child and spends her life seeking out the MiB. But Hemsworth is basically being asked to just play "Not Thor", with little else to define the character. This franchise has always been about stars rather actors, and we're simply not in a movie star era anymore.

The one standout in the cast is comic Kumail Nanjiani, who voices a small alien creature called a Pawn, and who we suspect riffed a lot of his own dialogue because he has literally every funny line in the movie. As soon as Nanjiani's character appears the film's entertainment value is increased, but sadly not by enough to make this more than an okay way to kill an evening.

Men in Black International is by no means a disaster. Gray keeps things moving along at a nice pace, the cast is likable even in underwritten roles, and the world of the franchise is still a fun place to visit. But with the almost exception of a rocket cycle chase that doesn't follow through on its promise, the film fails to deliver memorable set pieces, and the lack of big laughs in what is first and foremost a comic franchise is a big problem. We suspect that Men in Black International will join titles like The Bourne Legacy on the list of soft reboots that failed to invigorate the franchise in a new direction, and Chris Hemsworth will have to keep looking for a non-MCU hit.

For more MiB check out our other article - J.J. Abrams Is An Alien! Well in MiB: International Anyway.