Movie Review: "Dark Phoenix" Has A Few Sparks But Never Quite Catches Fire 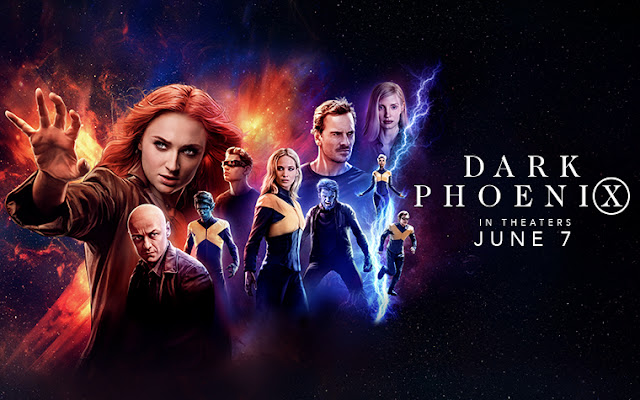 Nineteen summers ago, the first X-Men film hit theaters, and we were there opening day. We had never read the comics, but we loved superheroes, and it came from the director of The Usual Suspects. We ended up seeing the film six times.

During the time since then, the series has had a lot of highs and lows, with the greatest highs (X2, Days of Future Past, Logan) standing among the very best comic book films ever made, and the lows (The Last Stand, X-Men Origins: Wolverine) being so bad that they had to be retconned out of existence. X-Men: Apocalypse wasn't as bad as it gets made out to be, but it was a very lacklustre way for Bryan Singer to end his run with the series. It wasn't enough to take away from his legacy, but sadly he found far worse ways of doing that (we don't want to go off on that whole sad, disturbing stain on the series here, but you can't talk about the state of the franchise going into the final film without acknowledging the black cloud that it casts). Writer/Producer Simon Kinberg has been a part of both the highs and lows, and many of us were really rooting for him to succeed in his directorial debut, and to take us out on a high note, exercising the demons of The Last Stand once and for all.


As Dark Phoenix begins, the X-Men are flying a mission into space to rescue an imperilled space shuttle Endeavor. Things get dicier than expected, and Jean Grey (Sophie Turner) absorbs a mysterious cosmic force that amplifies her powers to unimaginable levels, causing her to lose control. Jean is torn between duelling forces that will determine her destiny and quite possibly the fate of the everyone, and the X-Men will have to face the question: can they save both Jean and the world?

The Dark Phoenix story arc is a very dramatic one, and it's going to be heavy if you do it right. But even the super dark Logan had its elements of humor that are an important part of the franchise, and a sense of humor is almost completely absent from this film. Kinberg is so committed to doing the dramatic elements justice that he forgets to allow the film to have a tangible sense of fun. It isn't without its exciting moments, but as a director he hasn't exactly mastered action staging yet. And there are plot elements that just flat out don't work, some of them undercutting great characters. Perhaps where Kinberg succeeds best is with heightened dramatic elements, establishing an almost operatic feel to some sequences which is absolutely in line with the thematic feel of this franchise. Kinberg genuinely cares about these characters and their world, and wherever else he comes up short, at least that always shows.

James MacAvoy gives another strong performance, and the attempt to explore the human flaws of Charles Xavier is an interesting and worthy goal. But it never truly comes together, mostly because Kinberg is stuck on the question of whether or not Charles have made certain choices, when the real question he should be exploring is: what was his motivation in making them? Michael Fassbender's Erik Lenscher largely just goes through same endless cycle we've seen with the Magneto character, and it's just kind of irritating, but worse are the missteps that are taken with Nicholas Hoult's portrayal of Beast. He gets one great scene but the soul of the character is largely lost. Faring far better is Tye Sheridan as Scott Summers/Cyclops, who effectively steals the movie. Sheridan's performance importance can't be overstated, because his ability to convince us that he is the exact same character that James Marsden played (and his strong feelings toward Jean) are the only reason we have to feel any investment in her fate.

Sophie Turner's Jean is of course the center of the film, and she has been given no less a scene partner than Jessica Chastain to play off of. But Turner simply isn't a very dynamic or interesting actress (though her performance here at least feels a bit more confident and polished than in Apocalypse), and she needs a much stronger script and direction in order to make this soar. Chastain's performance can't be faulted, but her character in a complete train wreck. It's a shallow and one note villain unworthy of an actress of her caliber.

For all its problem, this is still an X-Men movie, and a fairly entertaining one. It is often intense, and even occasionally thrilling. Given the opportunity, we'd see it again out of love for the franchise, and for the moments when it approaches the feel of the classics that proceeded it. Kinberg is clearly trying hard to make the best movie he can, and we'd be interested to see if how well he progresses if given more opportunities in the director's chair. But he's been saddled with the impossible task of creating a dramatically and emotionally satisfying culmination for a comic book franchise that isn't hurt by comparison to Avengers: Endgame. In all of the ways that film felt like the resolution the movies had worked toward, this one just doesn't. That couldn't really be accomplished with a franchise as disjointed and inconsistent both in quality and coherent continuity as this one, but it's hard not to feel they could have come closer. Part of the problem is that Jean Grey is the emotional center of this film and every character's motivation, but Turner's version of the character is still too new to the franchise to elicit those feelings from the audience. The audience needs to be much more invested in this incarnation of Jean than these two films have inspired us to be for this to have the emotional heft it needs to have in order to work.

Hans Zimmer's rousing and very listenable score has the unfortunate effect of further distancing the audience from the X-.Men feel because it is so different from the established John Ottman style. Kinberg has replaced Singer's "two birds with one stone" composer and editor with Zimmer and editor Lee Smith (Christopher Nolan's regular editor), and that combined with the serious tone creates a feeling that Kinberg wants to emulate the Dark Knight series. In fact a sequence involving Xavier and Magneto toward the end of the film so strongly brings The Dark Knight Rises to mind that it's unintentionally funny.

Dark Phoenix is a film that fans of the franchise will certainly feel the need to see, and it will likely sit better with fans of the comic book arc than X-Men: The Last Stand did in 2006, and that's fair. It's not that kind of a dumbfounding, intelligence insulting stumble, but it also isn't the night and day difference in quality that it should be. A great film based on the Chris Clairemont's comic book saga has yet to be made, and it may never be. It remains to be seen how long it takes to assimilate the X-Men into the Marvel Cinematic Universe (we personally hope they take their time, because we frankly don't see it working at all, as it's a bit hard to see how anti mutant fear works in a world where superheroes get their Ben and Jerry's flavors ), but maybe they will revisit it some day. If that does happen, let's hope the third time is the charm.