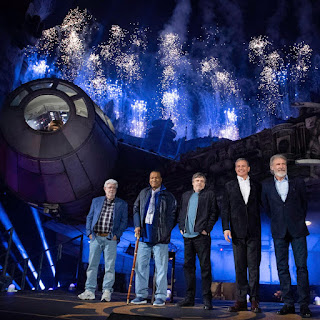 Star Wars: Galaxy's Edge was officially opened to the public on Friday but a "christening" ceremony was held on the Wednesday and there were a few surprised guests.  Billy Dee Williams Mark Hamill, Bob Iger and George Lucas were on stage to thunderous applause.  There was still one guest to bring on but first they had Chewbacca trying to start the full size replica of the Millennium Falcon.  Iger asked the audience if they knew anyone who could fix the thing.  A very familiar and distinctive voice cut in "She may not look like much, but she's got it where it counts." Of course, it was Harrison Ford who played Han Solo.  He also dedicated this small act to Peter Mayhew who played Chewbacca in the original Star Wars movies who sadly passed away on April 30th.  "Peter, this one's for you," said Ford.  He then promptly started the Falcon and fireworks engulfed with much approval.

Bob Iger also praised George Lucas who said when Disney bought Lucasfilm back in 2012 that he "entrusted us with his extraordinary legacy."

“When I first met with our Imagineers to talk about Star Wars, my message was actually quite simple: ‘Do not be ambitious. Be the most ambitious that you have ever been.’ After all, we are building on the legacy of two extraordinary visionaries, Walt Disney and George Lucas.”

George Lucas said "It's Star Tours on steroids on a level you can't possibly believe...It was a great experience for me, and I think that it'll change your life."

Mark Hamill also had praise for Galaxy's Edge saying "I thought, 'This is inconceivable that I could be part of a movie that would get its own ride in a Disney theme park. I better savour the moment because it will never be surpassed,'" the actor recalled. "And yet, look at where we are today. We get our own land."

You can read more about the full experience at THR and friend of The Bearded Trio, Dan Zehr from Coffee With Kenobi.