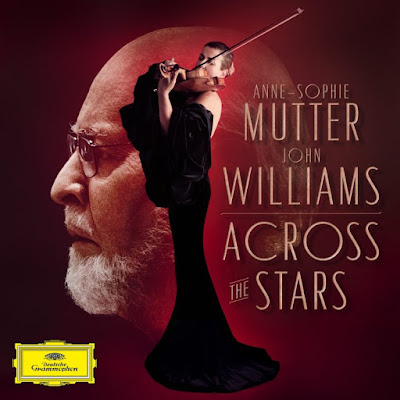 Legendary film composer John Williams and superstar violinist Anne-Sophie Mutter have announced a new album, Across The Stars. Released on 30 August, the album will feature Williams conducting new arrangements of some of his iconic movie themes, including pieces written for the Star Wars and Harry Potter movies. Across The Stars was recorded at the historic Sony Pictures Scoring Stage in Hollywood, where many great film soundtracks of the past were recorded.

"There is only one John Williams," said Anne-Sophie Mutter. "What he writes is just extraordinary. Every time I go to one of his films and there is a violin or cello, I think, I would like to play that! And now I have his wonderful translations of all these iconic themes." She added it was a "a tremendous honour" to work so closely with John Williams – and that the recording conditions for this album were the finest since she collaborated with Herbert von Karajan.

"Working with Anne-Sophie on this recording has been a pure inspiration," added Williams. "She has brought vibrant life to these familiar themes in new and unexpected ways, which has been a great joy for me as a composer."

John Williams explained that for this project he revisited themes from many of his existing scores and completely transformed them. "Presented on the violin, they become a different emotional experience," he said. One example is his newly arranged version of 'Hedwig's Theme' from the Harry Potter films, which he and Mutter describe as "Harry Potter meets Paginini", and "a Carmen Fantasy for the 21st century". The music ranges from Star Wars motifs such as 'Yoda's Theme', from The Empire Strikes Back, to more recent pieces such as 'Sayuri's Theme' from Memoirs Of A Geisha.

John Williams – who has won five Oscars, four Golden Globes, five Emmys and 24 Grammys – is the most successful film composer of all time. He has composed some of the most popular, recognisable and critically-acclaimed film scores in cinematic history. Anne-Sophie Mutter is universally considered to be one of the greatest violinists of modern times. They both consider Across The Stars to be a milestone recording.

"These are melodies which touch us so deeply, they just stay with you," said Mutter. "That's the wonderful thing about John's music – even without the film it has a life of its own."

The full tracklisting for Across The Stars by John Williams and Anne-Sophie Mutter is:

Find out more about this wonderful new album here and you can listen on various streaming platforms here.