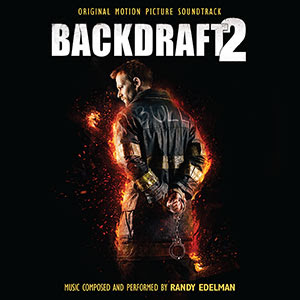 More soundtrack goodness from Intrada as they announce release of Backdraft 2 by Randy Edelman.  Priced at £17.99.  Here's the press release:


In 1991, director Ron Howard released his ode to firefighters everywhere – Backdraft – a film about two Chicago firefighter brothers who don't get along, but are forced to work together while an arsonist is on the loose wreaking havoc. Kurt Russell and William Baldwin played the brothers, supported by an impressive cast that included Robert DeNiro, Donald Sutherland, Jennifer Jason Leigh and Scott Glenn. The original film also sported a spirited early score from composer Hans Zimmer. Now 28 years later, Universal Pictures presents a sequel – Backdraft 2.

William Baldwin and Donald Sutherland reprise their roles from the original, adding Joe Anderson and Alastair Mackenzie to the cast with Gonzalo Lopez-Gallego directing. This time around, an investigator with the Chicago Fire Department is tracking down an arms dealer who is responsible for using deadly fires as a distraction. Also along for the ride this time is veteran composer Randy Edelman (The Mummy: Tomb of the Dragon Emperor, Dragonheart, Angels in the Outfield). Incorporating some of Zimmer's style from the first score, Edelman crafts his own path in this sequel, performing the recording as well. The score opens with a beautiful, heart-aching cello solo and then moves into a more atmospheric vein to set the stage for the nefarious story that unfolds. Keyboard is featured prominently, whether carrying a melancholy melody or providing tense rhythms. But the score centers around a heroic theme for the protagonists. Moody, suspenseful, heroic, uplifting, terrifying – it's all here in this dynamic score.
This Intrada release features just over an hour of Edelman's elegant score, courtesy of Universal Pictures.