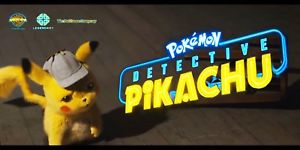 So this is what seeing a Teenage Mutant Ninja Turtles movie feels like to a non-fan.

We were in our mid-twenties when the Pokémon craze hit, and for quite some time all we really knew about it was that the toys were featured in a bizarre KFC commercial. It still takes us by surprise and makes us feel old that there are so many adults who grew up on this, which until about two years ago we still thought of as something relatively recent that was popular with kids aged 9 to 11. Which is to say that we are decidedly not in the target audience for  Pokémon: Detective Pikachu. We decided to approach this two different ways: Patrick would do a little research and watch a cartoon or two to get some very basic familiarity with the source material , and Paul would remain blissfully ignorant, allowing us to see how much difference that made. The verdict? For fairly basic comprehension of the world in which in this film takes place, it doesn't make a huge difference (though there were definitely aspects of the story that left us both seriously confused.). But based on the reactions from some of the devotees in the audience, this is definitely a movie for fans.

The story takes place in Ryme City, a comic book like city that is definitely somewhere on Earth on someplace kind of like it, populated by both humans and Pokémon. Pretty much everybody seems to have a personal Pokémon "partner", whether they're involved in training and fighting or not, for reasons that were certainly never clear to us, but may be less confusing to aficionados. Tim Goodman (Justice Smith of Jurassic World: Fallen Kingdom) is a lonely misfit without a Pokémon to call his own, and he soon is even lonelier when he discovers that his father, a detective named Harry Goodman, has died. Tim soon finds himself investigating Harry's death along with Harry's Pokemon partner, a Pikachu (you know that character people seem to somehow miss is way more annoying that Jar Jar Binks and Elmo combined, but still not quite as bad Chris Tucker) who only Tim can understand, as our protagonist hears the voice of Ryan Reynolds instead of sequeaks of "Pikachu".  Tim and Detective Pikachu also join forces with reporter Lucy Stevens (Kathryn Newton)  of CNM, which is not a copyright violation, and her Psyduk (our favorite character in the film.).

Pokémon: Detective Pikachu seems to be going for something of a Who Framed Roger Rabbit vibe, with a nourish mystery that mixes humans and goofy creatures. But where that film was irreverent and often uproariously funny, this one stays more firmly aimed at younger audiences (which is probably a good thing) and is really more cute and pleasant than it is genuinely funny. What works about the film (at least from a non fan's point of view) is primarily the fun creatures and a stellar voice performance from Reynolds, who shows here (much as he did in The Hitman's Bodyguard) that his talent and strong commitment can elevate weak material. His dry delivery makes the joke lines more amusing than they should be, and he is engaging throughout. His human co-stars are hit and miss: both Smith and Newton are the kind of performer who leaves you constantly debating with yourself as to whether they're cute/charming or just irritating, and we hadn't made a final decision by the end of the film. Bill Nighy is the closest thing to a memorable human presence, but the best thing that can be said of his role is that he's given more to do than Oscar nominee Ken Watanabe, who can at least take solace in the fact that this isn't even his most interesting movie from Toho Studios coming out this month.

It must be said that the children at the screening we attended were enthralled, and that's a strong point in the film's favor as it really does seem to be aimed first and foremost at them. And the film refreshingly seems to respect and value that young audience, resisting the lowbrow bodily function jokes that usually abound in films for that age group. If your kids love Pokemon they're very likely to enjoy this, and the good news is you'll probably be confused but mildly entertained. Unless of course you grew up on the franchise and love it, in which case this movie is much more for you than it is for us. We found ourselves finding the universe and mythology to be engaging enough that we wouldn't object to watching the cartoons if Paul's three year old son get into them, but not so enthralling that we felt compelled to rush out and further explore the Pokémon universe. We remain neutral to the franchise, neither fans nor detractors.

The bottom line is that if you're one of the fans we keep hearing say "I can't wait to see this movie!", we think you'll have fun. If you're not, you could do a lot worse and will probably find yourself mildly amused.