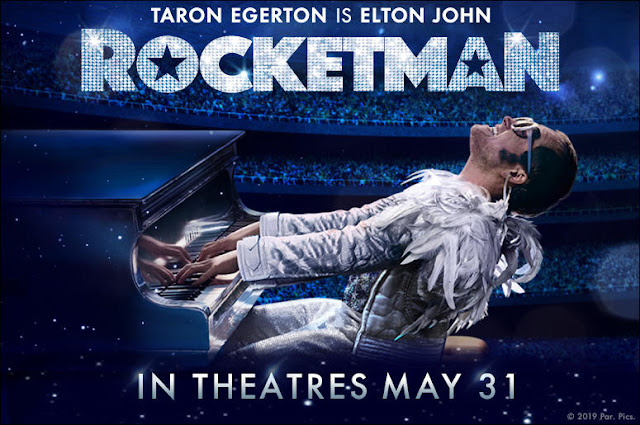 
When you look back at all of the films that were released last year, Bohemian Rhapsody was definitely one of them.

I'm sorry if I tend to go hard on this fan favorite, and I know that many of you out there absolutely loved it. But in all fairness, I am right and you are wrong. The movie was certainly not without entertainment value, and the Live Aid sequence was a towering achievement in the sense that the footage of the actual event that you can watch on YouTube is a lot more fuzzy. But if you wanted  A.) A movie about the history of Freddie Mercury and Queen that actually chronicled the history of Freddie Mercury and Queen, or B.) an inspiring film with a gay protagonist that wasn't chock full of backhandedly homophobic moments that left you shouting "I love the smell of face palm in the morning!, it was decidedly lacking.

It also was very definitely not directed by disgraced former hit maker Bryan Singer. Nor was it directed by up and comer Dexter Fletcher (Eddie the Eagle), or the ghost of Freddie Mercury's teeth, so nobody freak out or try to get to the bottom of anything. But speaking of Dexter Fletcher and biopics about gay British musicians, it's finally time to talk about Rocketman.

We first meet Reggie as a child in an elaborate musical number set to "The Bitch is Back", a lively sequence that unfortunately just feels a bit too rehearsed and lacking in spontaneous energy. We meet Reggie's family: his icy mother, Sheila (Bryce Dallas Howard), his sympathetic grandmother Ivy (Gemma Jones), and his utterly bastardacious (unless there is no such word) father, Stanley, who is at best indifferent to his son, at worst insulting and mean. After his parents split, Reggie takes up an interest in music, starting with piano lessons before performing in a band as an adult, when he abruptly turns into Taron Edgerton and attends the Royal Academy of Music.

When Reg responds to an add for songwriters, he meets a young lyricist named Bernie Taupin (Jamie Bell) and a partnership is formed. Reg decides he needs a stage name (the film portrays him taking the name "Elton" from a fellow band member, which is pretty well documented, and then, when put on the spot, he adds "John" as a last name in a spur of the moment decision when he sees a picture of John Lennon. It's a cheesy movie moment that doesn't match any stories out there about the inspiration for the name, and suggests that if he'd been asked to provide his name while eating dinner we may well have a superstar musician with a Knighthood who goes by the name Sir Fancy Ketchup). When Elton and Bernie strike gold with "Your Song", Elton rises to super stardom under the management of John Reid (Richard Madden), who literally seduces Elton, and the relationship becomes more than just a professional one. It is then that Elton develops a severe drug and alcohol problem and goes into a self destructive downward spiral.

Rocketman pulls a lot less punches than Bohemian did, wisely realizing that this is a dark story that can't be watered down for mass audiences. It's also a lot more daring in terms of storytelling structure, playing out as full blown musical and framed by sequences of Elton at rehab, which he goes to without bothering to change out of his outlandish stage costume. The whole approach screams that director Dexter Fletcher (fully credited this time) is trying to be Baz Luhrmann. It's not a bad approach, but even Baz has trouble pulling off being Baz sometimes, and Fletcher even more so.


It's hard not to get distracted by the thought that this may well be the most meta film in recent memory: a musical about Elton John wherein his thoughts and the thoughts of others are told through his songs (though they are Taupin's lyrics, so they are not Elton's thoughts), starring a young actor with whom the real Elton John previously shared the screen in Kingsman: The Golden Circle.

The story of the small town boy desperately seeking love and approval from his macho and distant father echoes Billy Elliot, a film that Elton loved so much that he turned it into a smash hit Broadway musical, and the film is written by the original scribe, Lee Hall. For good measure, Billy himself (Jamie Bell) is cast as Bernie, and there is the aforementioned blatant influence of that movie where Ewan McGregor sings "Your Song". No movie that is this utterly self conscious should work at all, but much of the time it actually does, precisely because that sense of self consciousness and struggling for identity sums up exactly Elton John was for so much of his life.

The movie rests heavily on Edgerton's shoulders, and it's a bold and much needed comeback after the dismal failure of Robin Hood. Edgerton is an extremely charismatic young man, and we haven't seen a lead in a musical biopic sing the role this well since Val Kilmer in The Doors. But Bell provides the movie's soul as Taupin, the friend and partner who never wavers in his belief in and (support of) his talented friend. The relationship between these two men, a platonic love, is quite touching much of the time. It's also where the movie succeeds best in rising above Bohemian Rhapsody's surprisingly judgemental portrayal of its lead character's sexuality, as Taupin's complete support of Elton and unconditional embracing of who he is provides the movie with a much more positive portrayal of sexual identity. Most of the time.

For some reason, Hollywood feels a need to put villains into these movies. In Bohemian Rhapsody, it was the mustachioed manager Paul Prentiss, who was portrayed so one dimensionally that one got the feeling that he grew the moustache just to catch the excess slime oozing from every pour. In Rocketman, it's John Reid, who ironically enough was a good guy played by Aidan Gillen in the other film. In both cases, these relationships happened, but the films give us portrayals that are not only very simplified and one sided, they leave us with a feeling that a movie with a young and naive gay protagonist must contain a lecherous and treacherous older gay villain who uses and abuses them, sending a message that we must all still keep our gaydar on at all times and have it set to Music Promoter. Madden can't be faulted for his performance, and truthfully, it's likely that the portrayal isn't lacking in basis, but it's still only slightly more subtle than the Devil costume that Elton wears to rehab.

On the whole, the movie deserves credit for taking risks, and delivering a compelling story with some genuine emotion. It's not a truly great film by any means, but it has a sense sincerity (even when it's blatantly fictionalizing) that helps it rise above some of the pitfalls of the genre. Whether it will make the same kind of splash as its most recent predecessor remains to be seen, but Edgerton and Bell deserve to be remembered come awards season.