Movie Review: "The Hustle" Robs Itself of Credibility 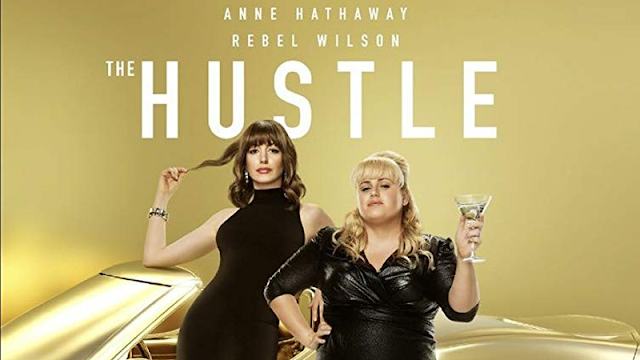 If the United States of America ever actually has an official second Civil War (we're basically in a Civil Cold War right now), history books tracing the watershed moments that lead to the bloody divide in the nation should at the very least contain a footnote about Paul Feig's 2016 version of Ghostbusters. The fact that such a light, innocuous and instantly forgettable film became a point of such heated contention would be insanely funny were it not for the fact of the people who crusaded against it as the mere idea of female leads in a movie was part of some sort of insidious plot. Despite the film's tepid box office, the uproar it caused has not been forgotten, and it spawned it's own minor sub genre as we saw last year with Ocean's 8.

Josephine Chesterton (Anne Hathaway) is an intelligent and sophisticated British con artist operating in Beaumont-sur-Mer on the French Riviera. She seduces wealthy and chauvinistic men, and steals their money. His only concern is another con artist known as "Medusa", reported in the area.

While on a train, Josephine meets small-time American hustler Lonnie (Rebel Wilson), who fleeces stupid men out of free meals and a few hundred dollars here and there and makes the mistake of bragging to Josephine about her exploits. Worried that Lonnie's inexperienced antics will scare away her prey, Josephine first tries to get rid of the uncouth newcomer but eventually agrees to take her on as a pupil.

The problem with doing a feminist version of Dirty Rotten Scoundrels is that Dirty Rotten Scoundrels is already the feminist version of Bedtime Story, a 1964 comedy starring David Niven, Marlon Brando and Shirley Jones. SPOILER ALERT (ONLY IF YOU HAVEN'T SEEN DIRTY ROTTEN SCOUNDRELS) Frank Oz's brilliant 1988 remake saw the two caddish and chauvinistic con artists having the tables turned on them by the very woman they were trying to scam, because they failed to consider the possibility that she was not only sophisticated and intelligent, but better at the game than they would ever be. It was a wonderfully subversive take on the material, and while The Hustle tries to incorporate the the angle of women outsmarting pompous men who are are too sexist to see them as a threat, it undermines itself by forcing them into the situation of having them be outsmarted by a younger man who even takes advantage of Lonnie's deep insecurities about her own level of attractiveness. END OF SPOILER.

Where Ghostbusters had an all new story (albeit a very flimsy one), The Hustle is such an extreme beat for beat remake that it gives the writers of Bedtime Story and Dirty Rotten Scoundrels co-credit for the screenplay rather than listing it as an adaptation. The upside of this is that if you haven't seen the original, you have a very clever storyline to enjoy, played to the hilt by two very talented and appealing stars. It's a shame that far too much of the "new material" is more crass and lowbrow than it needed to be. Wilson is a talented comedic actress, and her "I'm real woman who actually eats food, not a Barbie doll" can be very refreshing and even empowering. It can also be degrading when it's get too caught up in cheap gags and defense mechanism "I'm going to call myself disgusting before you can" kind of comedy. Look at the difference between Pitch Perfect and Pitch Perfect 2 and you should get exactly what I am talking about.

Anne Hathway seems to be having a lot of fun (it's a weird moment when you realize that Selena Kyle has stolen Alfred's part), though her British accent feels so much like a character voice that it would have been a better choice to play it as an affectation by an American con artist (instead they show her using her real voice as such for a con, and while it's an amusing bit, it only serves to make her main performance seem more cartoonish). Wilson is very funny when the character is allowed to have layers instead of relying on one joke, and Alex Sharp (How To Talk To Girls At Parties) makes a strong impression.

On the whole, The Hustle is a pretty enjoyable (but very disposable) comedy if you haven't seen Dirty Rotten Scoundrels, but if you have, it's likely to make you wish you were just watching it again.