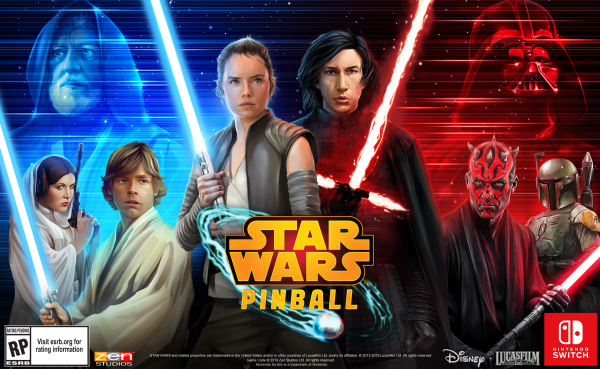 From its booth at Star Wars™ Celebration Chicago, Zen Studios announced that Star Wars™ Pinball is coming to Nintendo Switch on September 13, 2019. The first Star Wars game releasing on the Nintendo Switch platform, Star Wars Pinball will debut with its entire collection of 19 digital pinball tables that span all three Star Wars eras and will take full advantage of the Nintendo Switch’s unique functionalities, like HD Rumble and vertical play orientation. In addition to its digital availability through the Nintendo eShop, Star Wars Pinball will also hit retail shelves for the first time ever as a physical product, exclusively for Nintendo Switch.
The Star Wars Pinball Nintendo Switch collection will offer unique gameplay modes only available on the console. Players can participate in a community-wide Galactic Struggle, which allows them to contribute points to the light or dark side, depending on their preference. Likewise, a new Career mode allows Star Wars fans to join the ranks of the Jedi or Sith as they achieve up to 50 Career Ranks, and simply playing any table unlocks special Force Power bonuses that can be applied toward bigger scores. Simply playing any table unlocks special Force Power bonuses that can be applied toward bigger scores, and a Force Training mode will help pinball Padawans maximize their potential.
“As soon as we announced Pinball FX3 for Nintendo Switch in 2017, the main question we always received from fans was ‘where’s Star Wars?’,” says Mel Kirk, Vice President of Publishing at Zen Studios. “We’re thrilled to bring the Star Wars Pinball experience to fans who have been eager for its arrival on Nintendo Switch. Combining the amazing Star Wars Pinball collection with the innovative hardware features available on Nintendo Switch provides a really outstanding experience in the home, on the road or anywhere else in the galaxy.”
Star Wars fans of all generations will enjoy tables centered around adapting movie and TV show content, iconic characters, memorable locations, and general Star Warsthemes:

For more information on Star Wars Pinball and the rest of Zen’s library of digital titles, please visit ZenStudios.com or StarWarsPinball.com.

STAR WARS and related properties are trademarks and/or copyrights, in the United States and other countries, of Lucasfilm Ltd. and/or its affiliates. © & ™ Lucasfilm Ltd.