Star Wars in Numbers: Anakin is strongest with the Force, while Chewbacca is one of the deadliest characters

Have you ever wondered which Jedi is really strongest with the Force, who wielded their lightsaber the most, or which character lost the most limbs?

Star Wars in Numbers collates a huge amount of data from every film and compares them across 23 categories to produce the definitive stats from the franchise.

This includes total Dark Side followers killed, Force uses, lightsaber battles and the number of alien species, along with the featured vehicles, droid models, limbs lost and much more.

Episode III: Revenge of the Sith features the most limbs lost, most Jedi deaths and the most droid models, while Episode VII: The Force Awakens claims the highest box office earnings, the biggest profit and the longest opening crawl. 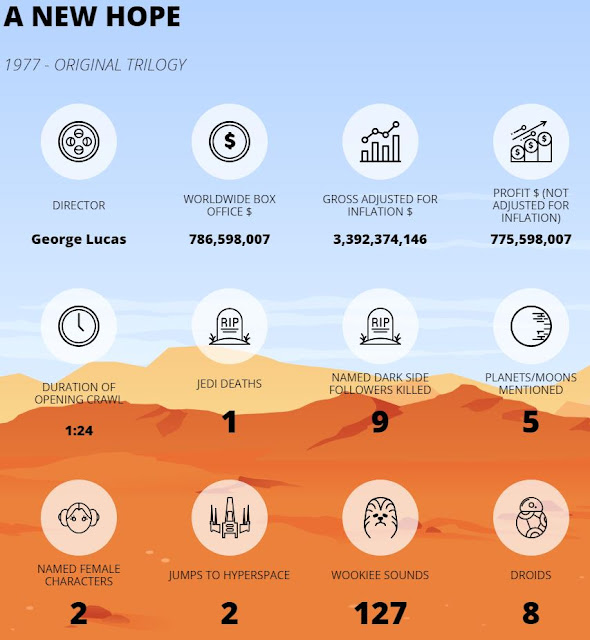 The detailed analysis also reveals that Anakin Skywalker is the deadliest character, with a death count of 3 named Dark Side followers and 8 Jedi. He is also strongest with the Force, claiming 48 of the 185 total Force uses across each film. Obi-Wan Kenobi is the most devout Jedi, saying 6 variants of the iconic “May the Force be with you” line, while Emperor Palpatine references the Dark Side a staggering 12 times.

You may know that Chewbacca plays a central role in the Star Wars story, but he’s also responsible for killing 4 named Dark Side followers - making him the joint second deadliest character alongside Palpatine.

There is a total of 260 aliens, 118 droid models, 184 vehicles and 86 named female characters featured in the films.

All 10 canonical Star Wars films are analysed in detail, from Episodes I-VIII in the Skywalker saga to the standalone instalments.

The full list of categories compared includes:
To find out which Star Wars film has the high ground and which chokes on its aspirations, Star Wars in Numbers has all the information you could need and much more about the galaxy far, far away...

To view Star Wars in Numbers, please visit: https://www.star-wars-in-numbers.com/ or click below


Powered by Star Wars in Numbers