The old Jurassic Park ride at Universal Studios, Hollywood was first opened in 1996 and has been misleading innocent park visitors ever since.  I say misleading because of my own experience back in 2003.  You see, I knew all about the ride and the surprise at the end.  I told my wife that it's a nice sedate ride around the river while you take in the views and the occasional dinosaur.  I didn't mention the huge 84-foot drop at the end as you escape an angry T-Rex.  She still hasn't forgiven me. 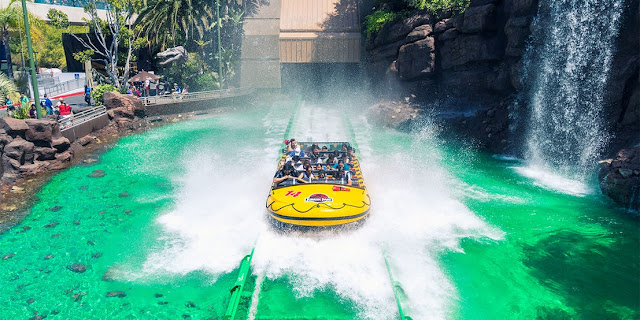 Anyway, Jurassic Park: The Ride is being replaced to incorporate Jurassic World and actually has a story-line as we get to see the Indominus Rex doing what it does best, wreaking havoc.  Other dino delights will be on hand including the huge water monster, Mosasaurus which will be swimming around in a three-million gallon glass aquarium and apparently tries to break the glass.  That's unsettling.  In addition there will be a Raptor enclosure where visitors can pet their favourite Raptor.  Just check you still have both hands before you leave.

Wait a moment! This all sounds too real and I hope Universal Studios haven't really discovered how to bring these Dino-DNA hybrids to life, after all their new tag-line for the ride is "It just got real,"  Hmmm!  Also, they do boast "brand new technology which has never before been seen within a theme park."  Hope they stopped to consider the consequences.

A new TV spot has just been released and even though there's a lot of new dinosaurs, it pleases me to see that old Rexy is still prominent in the teaser trailer.

Visit UniversalStudiosHollywood.com to get more info on JURASSIC WORLD: THE RIDE.  There is no specific date when the new ride is opening its doors but we've been told it will be this summer.  Just listen out for "oohs" and "aahhs,"  that's how it starts right?

They spared no expense.  Hope they have a coupon day or something.