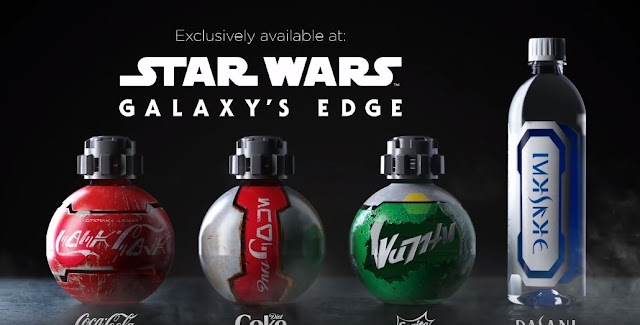 With the much anticipated Star Wars: Galaxy Edge just over a month away from opening at Disneyland in Anaheim (May 31st,) brands such as Coca-Cola are getting equally as excited as the Star Wars fans who are eagerly awaiting visiting the land of Star Wars. The drinks company are even bringing out custom Star Wars bottles of their Coke, Sprite and bottled water.

Expect to see Ebay flooded with empty sticky sugared bottles in the next few months. Also, who will be the first to post a Christmas Tree decorated with the custom bottles? Watch this space, well maybe not here but on the Internet somewhere.

Here's what Coca-Cola tell us:

When Star Wars: Galaxy’s Edge opens May 31 at Disneyland in Anaheim, Calif. and Aug. 29 at Walt Disney World in Orlando, Fla., park guests can stay refreshed – and immersed in the Star Wars storyline – with exclusive bottles of Coca-Cola, Diet Coke, Sprite and DASANI. Learn more at: https://www.coca-colacompany.com/stor...