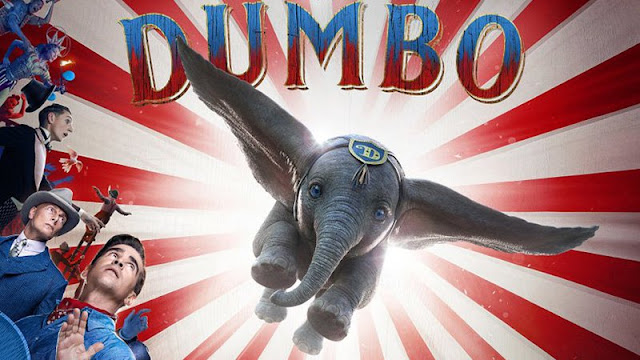 Walt Disney's 1941 Dumbo is a beloved and revered classic of animation, breaking new ground for Disney in terms of expanding past the tried and true public domain fairy tales, and it's filled with heart, laughter and beauty. Some aspects of it haven't aged well, between the issue of animal mistreatment in the circus (particularly in regards to elephants) and of course the infamous, cringe inducing sequence of "Jim Crow" and his cohorts doing what amounts to a feathery minstrel show (we confess, we loved that sequence when we were ignorant children, and we still have an attachment to the characters. And truthfully, kids these days are still pretty oblivious to any insulting racial subtext. But it's there, and it's a problem). So there was room to make some alterations in a new version, and maybe even improve some elements.

Director Tim Burton's live action Dumbo begins by introducing us to the Medici Bros. Circus, run by Max Medici (Danny DeVito), an ageing impresario who is barely able to hold his struggling show together. One of his former stars, Holt Farrier (Colin Farrell), a Wild West Show rider, returns home from the Great War minus an arm, only to discover that Medici has sold all of the horses Holt had trained for his act. Holt's two children, Milly and whatever the boy is called (Nico Parker and Finley Hobbins, the latter of which sounds like a great moniker for a Boy Detective or Inventor who stars in a series of novels in the 1960's) are apparently living alone at the circus because apparently their mother was killed in battle . . . no, wait, Dad was the one fighting in the war. Anyway, something happened to Mom, so the kids naturally became the property of Danny DeVito.

Medici offers Holt a job caring for and training the elephants, which he takes out of sheer desperation. The largest elephant, Jumbo, gives birth to a son, whose over sized ears make him a laughing stock. But when Holt's children discover that Dumbo can fly, persuasive entrepreneur V. A. Vandevere (Michael Keaton)and an aerial artist named Colette Marchant  (Eva Green) swoop in to make the peculiar pachyderm a star.

If that sounds a bit convoluted, we assure you that you ain't seen nothin' yet. When Samuel Goldwyn coined the phrase "too much plot and not enough story", he could have been talking about this movie. The first 35 to 40 minutes the film play reasonably well, making a few odd choices but nothing that isn't saved by astoundingly good CGI, a lovely score by Danny Elfman and the wilful desire to enjoy oneself. But once Dumbo starts flying, the movie takes a major nosedive that it can't pull out of no matter what it tries (and it tries everything from blatantly invoking E.T. to playing off of more enlightened sensibilities, and even throws in the accidental death of a completely irrelevant but nasty supporting character for good measure). Burton as a match for this material was a "maybe this works, maybe this doesn't" scenario, and we submit that if John August Big Fish, Charlie and The Chocolate Factory, Frankenweenie) had written the screenplay, this elephant might have flown. But sadly, Disney hired Ehren Krueger, whose filmography plays more like a rap sheet (Reindeer Games, Scream 4, Transformers 2-5, Ghost in the Shell . . . when a writer's standout "most coherent screenplay" is Terry Gilliam's The Brothers Grimm, you know you have problems). Krueger has to take a significant portion of the blame for this missing the mark so decisively, but Burton and his tendency to overdue everything add an extra helping of Gothic loopiness doesn't exactly help. Finally, it's just plain sad to see the director of 1989's Batman re-team with his caped crusader 30 years later only to guide him in what is almost certainly the worst performance of his entire career. Keaton is a great actor, but he's always been best when he's staying away from hammy theatrics and going for a more down to earth approach. He plays Vandermere with quirky mannerisms and an evil sneer, and literally the only over the top choice that Keaton and Burton didn't make was to give the character a monocle.


Colin Farrell tries gallantly to make it all work, Eva Green brings a grace and charm to her role (even if the question "is she supposed to be the bad guy's mistress? should never, ever be something you ask yourself while watching Dumbo), and it's great to see DeVito on the big screen again. But none of these characters quite work, and are written and directed to be drawn as broadly as possible. The young actors playing Jane and Michael or whatever their names are absolutely brim over with adequacy, and their interaction with the titular elephant is cute. But cuteness isn't enough to save the film.

Where previous "live action" versions of Disney animation have ranged from giving us something genuinely new (Cinderella, Pete's Dragon) to a mix of old and new (The Jungle Book) and finally to being a glorified big screen version of Disney on Ice (Beauty and The Beast), this new incarnation goes more for the "WTF?" approach of Maleficent. It's hard to see exactly what audience Krueger and Burton were aiming to please. Either way, for the most part, they failed. On the bright side, at least Johnny Depp is nowhere to be seen.