Movie Review: "Shazam!" Is Lightning in a Bottle 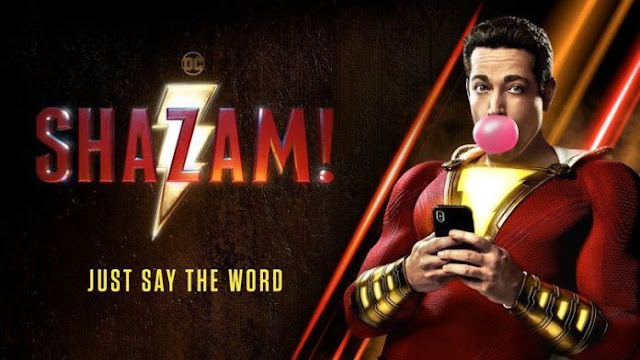 
First off all, as Shazam! is a story of a kid turning into a superhero, let's get the major immaturity factors out the way now: you are allowed to enjoy this movie without it reflecting on your status as a Marvel geek. We get it, you're a Marvel person, and the DCEU doesn't measure up (except for Wonder Woman. If you don't think Wonder Woman was as good many of the best MCU movies/better than the lesser ones, you are too hardcore to talk to other people). Even more importantly, this is not a "the original male Captain Marvel vs. Female Captain Marvel who is direct attack against decency, traditional white he-man hood and testosterone" (if you think this way, we beg you, please don't breed, but we get the feeling that isn't a problem we have to worry about too much). We must also be upfront that we grew up as big fans of the character, and Geoff Johns-Gary Frank New 52 introduction is among favorite comics of all time. So we didn't have to be sold on the concept like some do, but if they messed it up, it would have been The Lone Ranger all over again (thank you, Johnny Depp, for being nowhere in sight).

Set in the same time line as Justice League and the other DCEU films, Shazam! tells the story of a 14-year-old orphan, Billy Batson (Asher Angel) is sent to move in with the Vazquez family and their other five foster kids of various ages, sharing a room with a boy his age named Freddie (Jack Dylan Grazier of It fame), a disabled boy who has bit of an obsession with the Justice League heroes, and owns memorabilia such a batarang replica and a bullet that supposedly bounced off of Superman.

One day, Billy gets on a subway car and finds himself transported to another realm, where an mysterious and ancient wizard (Djimon Hounsou, who has the distinction of being underused in both Shazam! and Captain Marvel) gives him the power to transform into a godlike adult superhero by uttering the word "Shazam!" (Wisdom of Solomon, Strength of Hercules, Stamina of Atlas, Power of Zeus, Courage of Achilles, Speed of Mercury).
Billy (in the form of Zachari Levi) must turn to the only superhero expert he knows, Freddie, and the two set out to test out the limits of Billy's new powers and figure out what to do with them. Meanwhile, the villainous Dr. Thaddeus Sivana (Mark Strong, who was the Ben Mendelsohn of 10 years ago and must be again for this film since Mendelsohn was already doing Captain Marvel), has his own history with the wizard, and has obtained powers of his own, and unlike Billy he knows exactly what he wants to do with them.

Shazam! is as laugh out loud funny as the Deadpool films while keeping family friendly. It also achieves many of the innocent feelings of wonder and awe that one wants from great version of Superman that weren't quite there in Man of Steel and where set on fire before being flushed down the toilet in Batman v. Superman. It's a joyous romp that feel as much like a perfect melding of Big (there's even a clever visual reference to make the audience aware that the filmmakers are gleefully acknowledging the influence of Penny Marshall and Tom Hanks) and Amblin flicks (especially The Goonies and Gremlins). It's not trying to prove anything in regards to competing with Marvel or fitting in with the rest of the DCEU (in fact, detractors of some of those films are likely to get a charge out of the irreverent jabs it takes at them).

Zachary Levi has is a niche star who is unknown to many and worshipped in many of the same geek circles that honestly don't know that Nathan Fillion isn't quite as big a name as Harrison Ford, and this the first time since Tangled that his he has been given a chance to shine on the big screen. He does not waste a second of that opportunity, and he's even better than you'd expect him to be in the role. The distinction between Billy and his larger than life alter ego is basically non existent, with Levi and Angel developing such strong characterizations that when they switch back and forth you get completely swept up the viewpoint that this is one character as opposed to "here's kid from Andy Mack, and now here's the guy from Chuck pretending to be by the kid from Andy Mack". The two deserve a lot credit for gelling so perfectly, as does director David F. Sandberg for knowing just how to play it. And anyone who laughs when the hear the word "gazebo" can guess that young Grazier is the glue that holds the movie together and provides many of the very best moments, and close behind him is Faithe Herman as foster sister Darla.

The weakest elements of the film all have to do with Dr. Sivana. Mark Strong is a more than capable actor, but he is too often relegated to thankless roles that are largely personality free. This another example of him being cast as a villain who is merely an excuse to provide dramatic tension and action, not a strongly developed character in his own right (let's be honest, the number of super villains from ANY movie universe that have given us villains who rise above is easily less than 10). Director Sandberg shows his background in horror in some of the sequences centred around Sivana, and they do get a bit dark and may be a tad disturbing for younger viewers. We really hope that DC takes a moment to step back after this movie ask why they have kept using John Glover over the years (Dr. Woodrue in Batman & Robin, Lionel Luthor in Smallville and now Dr. Sivana's Lionel-esque fathe) when he's batting three for three in terms of performances that aren't obnoxious as hell.

The soundtrack is terrific, whether it's a perfectly sublime usage of Queen's Don't Stop Me Now, the eerie and effective use of Bing Crosby's Do You Hear what I Hear? in the opening sequence, or Benjamin Wallifisch's just the right mix of corny and rousing score. The fact that the film has a lower budget than we are used to these day for a major comic book based release can be seen sometimes in the effects, but even that has a certain goofy charm.

Shazam! is hardly going to do Avengers: End Game business at the box office, and it may get lost in the shuffle. But whether it is the unquestionable best film in the genre this year, it's very likely to stand out as our personal favorite, and it's one you can take the family to without feeling a need to study and cross reference any others.