Movie Review: Jordan Peele's "Us" is Terrifying, Provocative and Thrilling 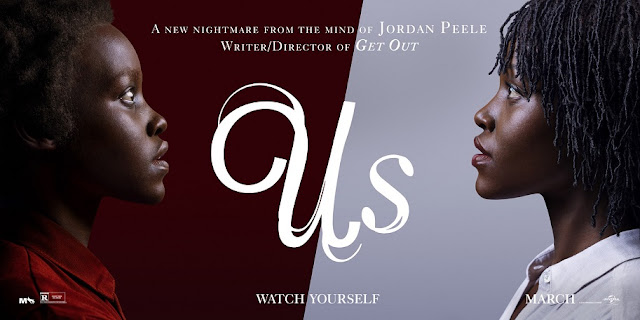 It's easy to get hyperbolic about an exciting new filmmaker who brings something unexpected that breaks up the monotony in mainstream film. It's particularly easy to do when the movies fall even close to the horror genre, because let's face it, any time there is an intelligent mainstream horror film it comes as bit of a surprise. For us, there is also a reluctance to do so, and the fact that we marked the 20th anniversary of The Sixth Sense with the release of Glass illustrates exactly why we feel this way. Many of the same superlatives being used for filmmakers such as John Krasinski and Jordan Peele were being tossed around in reference to M. Night Shyamalan, but for the most part the only person who is still lauding him as a bold visionary is Shyamalan himself. Get Out was far deeper and socially relevant than anything the one trick pony ever gave us, yet it was also a lot less pretentious. Jordan Peele's sense of humor and his laid back approach to the way he presents itself makes it all the easier to love and praise him.

Peele's sophmore effort, Us, centers around a woman named Adelaide Wilson (Oscar Winner Lupita Nyong'o) who suffered a traumatic experience as a child, when she got lost at a Carnival at the Santa Monica beach, wandering into a funhouse attraction where she saw something that changed her forever. Adelaide and her husband Gabe (Winston Duke, Black Panther) take their two kids on a trip to their beach house for some much needed relaxation, but Adelaide becomes anything but relaxed when Gabe pushes for a trip to the very same beach where the event that scarred her so many years ago took place.

When they return home from the beach, Adelaide is more agitated than ever. As the family prepares for bed, some unexpected guests appear: a family of four is standing ominously outside the house, immobile and watching the house.
Now, chances are more than strong that you are already familiar with some basics about the premise of this film, but if you haven't, and you're planning to go see it, we encourage you to stop reading and just experience it knowing as little as possible (but come back and finish the review afterwards). But if you're still on the fence and wanting more information, or don't think you're going to see the film but want to read about it, feel free to continue . . . NOW.

The mysterious strangers are even stranger than imagined (rim shot), as they are revealed to be exact dopplegangers of the Wilsons: instead of Gabe, we have a hulking, mindless brute called Abraham; daughter Zora (Shahadi Wright Joseph) meets her counterpart, Umbrae, a wide eyed girl with a chilling smile; young son Jason (Evan Alex) has Pluto, a wild boy whose face is covered by a mask, and finally, Adelaide has Red, the apparent leader of the group, and they only one who speaks. The mirror family's intentions toward the Wilson are anything but benign, and all hell is about to break loose.


Peele has constructed a perfectly crafted, edge of your seat piece of film making that will leave you grabbing your armrests and jumping in fright more than once, maybe even letting out an audible scream. As agoraphobic brothers who spent our childhood very easily scared by the slightest element of suspense, we have grown into adult cinephiles who have become so jaded and bored by the laziness of the horror genre (and frankly just feel a bit too old sometimes to get truly lost in a movie) that we tend to sit through even the better suspense films with a bit of a "meh" feeling pervading the experience. Butt the second act of the Us was so intense that we honestly had moments of wondering if we were going to make it through without going giving way to genuine panic, but even if we weren't reviewing the film, we simply had to see this through because we were that invested in what happened to this family. If that doesn't describe exactly what a great horror film is supposed to make you feel, we really don't know what does.

Peele's use of atmosphere and staging recalls classic Hitchcock, and his mastery of the camera brings to mind Spielberg (especially Jaws which gets directly referenced, and that may be the primary reason the Great Bearded One gets a special thanks on the credits). Shyamalan quite simply never displayed this dazzling a mastery of the craft, but shone brightest in his early works with his actors and character work. None of the star turns i his films, however, quite matches Nyongo's unforgettable tour de force as Adeliade and Red. As Adelaide, she establishes herself as leading lady and action heroine presence that goes even beyond her work in Black Panther, and as Red . . . that's hard to overstate. It's as mesmerising a performance that could have easily been just too over the top in less capable hands, but Nyong'o balances being bizarrely, almost inhumanly terrifying with a sense of pain and human suffering that is awesome in the most literal sense of the word. Nyong'o's performance is destined to be up there with Jack Nicholson in The Shining, Anthony Hopkins in The Silence of the Lambs, Kathy Bates in Misery and other icons of the genre, but she's doing it twice over. It's very rare for an acres to start out her big screen stardom with an Oscar win and not be left with nowhere to go but down, but Lupita Nyong'o is more than the exception. She may well be the most exciting presence in front of the camera today.

The rest of the cast lends great support, with Duke almost unrecognizable as the same actor who played the powerfully imposing M'Baku in Black Panther, and young Shahadi Wright Joseph stealing more than her share of scenes as both Zora and Umbrae.

It's hard for anything to match the layers of commentary and meaning that people are still peeling away in Get Out, one of the most intellectually biting mainstream entertainment films ever made. But with Us, Peele provides a different type of socio-political commentary about how the crisis of tense division in our self destructive society, and the desperate need to recognize those things that bind us together. It literally couldn't be more timely, coming one week after the world saw one of the most horrifying examples of the "us" versus "them" mentality in recent history (and one of the most jaw dropping examples of rationalizing what is justified when done by "us" as opposed to when it's done by "them"). It's also a story about the other 99% and their efforts be heard, about the Deplorables vs. the Woke . . . in fact, much more so than Get Out it's really about what you choose to find in it.

Hopefully, the deeper meaning of the film will spark serious discussion and a desire to look inward and reach out. But even if all the movie does for you is provide solid thrills and scares, it will still be one of the most memorable experiences you have in a theater this year. Whether Peele chooses to be a genre director or intends to branch out remains to be seen, but what seems certain is that he us forcing horror to get better and smarter if it wants to keep up with him.