Movie Review: "The Highwaymen" Goes Down Mostly Familar Roads, But Does it In Style 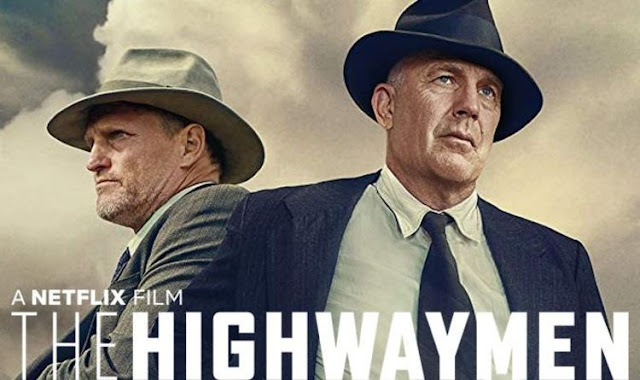 
Director John Lee Hancock has never been a cutting edge kind of guy. Armed with a filmography that includes The Rookie, The Blind Side and Saving Mr. Banks, he's a straight shooter who specializes in straightforward character oriented crowd pleasers for people who like to lean back in their seats and say "they don't make pictures like that anymore", aren't interested in big surprises and prefer comforting throwbacks to groundbreaking, daring art or effects filled blockbusters. But he is very good at what he does, and he knows how to deliver.

In Hancock's latest, The Highwaymen, it's 1934,  and murderers and robbers Bonnie Parker, Clyde Barrow and Henry Methvyn stage a daring breakout from the Eastham Prison Farm. It isn't long before they have murdered another six police officers, and Lee Simmons (John Carroll Lynch), the head of  the Texas Prison System, talks Governor Ma Ferguson (Kathy Bates) into handing the case over to former Texas Ranger Frank Hamer (Kevin Costner). "Why don't we just dig up Wyatt Earp?" Ferguson exclaims (and Bates is such a good actress that the irony of the fact that Hancock is doing exactly that doesn't feel overplayed). Hamer is reluctant to take on the job at first, but accepts the case out of a sense of outrage at the romanticised version of Bonnie and Clyde as Robin Hood style heroes (the Costner irony stops there, which is good, because there really is no place in the story for a baseball field or the earth being covered by water) and he enlists the aid of his former partner Maney Gault (Woody Harrelson) in his search for the infamous outlaws.

Costner is in top legendary movie star form, and it's hard to imagine the movie working nearly as well with anyone else. This is one of his most confident and assured star turns in years, and Hancock makes the most of it, making Hamer a mix of larger than life cowboy and very real man (but not an everyman, as he has seen and done far too much to be called that). While Costner at his best is a truly great leading man, Harrelson is of course the more versatile and gifted actor. Luckily, one of the things that makes him stand out as one of the greatest out there is his remarkably unselfish "assistant storyteller" attitude, and his willingness to put the movie ahead of his ego. Woody and Kevin make a terrific duo, complimenting each others strengths and making the long history of the characters and partners sell so well that by the end you'll find yourself convinced that this can't be the first time they have been paired on screen, as they go together like Redford and Newman or Easwood and Freeman. The movie rests predominately on their very capable shoulders, but there are  also some very memorable supporting turns, most notably the perennially underrated William Sadler as Clyde's father, Henry Barrow. While it amounts to a one scene role, Sadler very nearly steals the whole movie, and he and Costner play so well off of each other that if this were a play, the sequence would end to thunderous applause.

Hancock is a deft hand with staging and knows how to use the camera to maximum effect without getting too showy, and veteran cinematographer John Schwartzman (Pearl Harbor, The Rookie, Seabiscuit, Jurassic World) does a masterful job, and together with editor Robert Frazen (Smokin' Aces, The Founder, The Company Men), production designer Michael Corenblith (Apollo 13, Frost/Nixon, The Finest Hours) they have the visual craftsmanship of this down to near perfection. When you add the magnificent work of composer Thomas Newman (Little Women, American Beauty, Road to Perdition, Cinderella Man, Skyfall, Bridge of Spies) to the mix, you have all of the elements that are needed to make The Highwaymen feel like a full, rich cinematic experience, even if you are seeing it on the small screen.

The million dollar question here is: how does it all stack up to Arthur Penn's 1967 masterpiece Bonnie and Clyde?  That's where the reviews have been less than kind thus far, and the mistake that is being made is the belief that the two films must be matched up directly to each other. The comparison is inevitable due to subject matter, and the question of whether Hancock and screenwriter John Fusco are trying to make a rebuttal to that film's death or glory view of the famous young couple (as potent as the Hamer/Wyatt Earp connection  may be, the far more interesting piece of irony is the casting of the lead in Oliver Stone's Natural Born Killers as his partner). But the two films are not only opposites in point of view, but in their intent and approach to filmmaking. Where Bonnie and Clyde was a hip and bold film for a new generation, The Highwaymen is at best ambivalent toward the 18-35 demographic, targeting a completely different audience. It's the kind of movie that is more interested in monologues about traumatic events that happened thirty years ago than in breaking any molds. 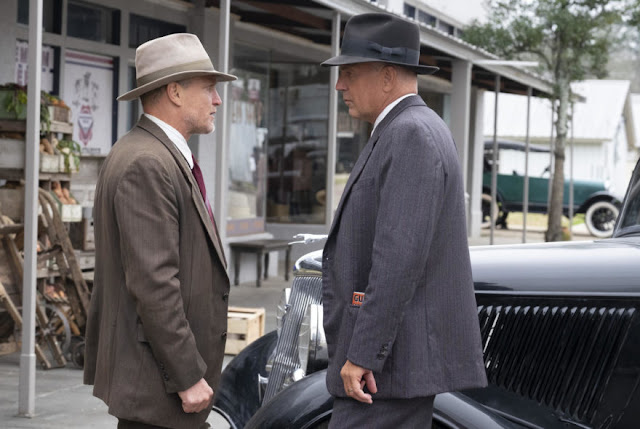 If you are going into a John Lee Hancock movie starring Kevin Costner expecting to see something bold and hip, you're looking to be let down big time. While there are definitely some opportunities lost in terms of delving deeper into the question of whether a hardened killer like Hamer is any more worthy of romanticism than Bonnie and Clyde were just because he did  it for the government (the movie follows the model of the '90's post Unforgiven western by brooding about violence without fully condemning it), The Highwayman knows what it wants to be and it largely succeeds.

If you wanted something different, that mostly isn't this movie's problem, it's yours, and you have every right to look elsewhere.