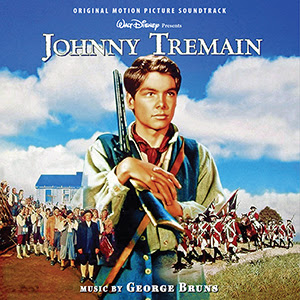 Music by GEORGE BRUNS
INTRADA ISC 425
Intrada's latest release from the vast Walt Disney catalog stretches back to 1957, with George Bruns' music for Johnny Tremain. Bruns is best remembered for his scores to 101 Dalmatians, The Jungle Book, and his adaptation of Tchaikovsky's Sleeping Beauty. With the release of Johnny Tremain, Intrada brings focus to his scoring for live-action films. Unlike the current and often non-thematic nature of today's film music, Walt Disney loved prominent melody. To that end, Bruns ensured that the Tremain score was built around two main themes. One theme is for Tremain himself — a four-note motif constructed around the syllables of the character’s name, often played in emotional, legato strings. But hero of the story or not, the centerpiece of the score is the second theme — a rousing march entitled "Liberty Tree."

An album had been released contemporaneously with the film, featuring a re-recorded 20-minute suite of music from the film on one side. The performance closely adhered to its soundtrack counterpart, but with more of a studio acoustic. The other side included traditional patriotic songs. For this release, Intrada leveraged the complete mono scoring masters made at the Walt Disney Scoring Stage back in 1957 as well as the Bruns program side of the LP. 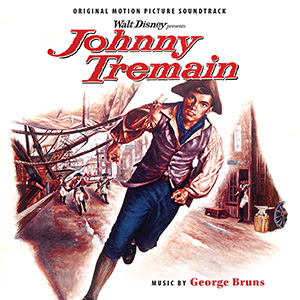 The film was originally filmed for television, scheduled to be shown in two parts on the Disneyland show in February 1957. But after investing a considerable amount of money in the film, Disney decided to edit the footage into a theatrical release prior to showing it on television. The story tells of Johnny Tremain (Hal Stalmaster), an apprentice silversmith, who, after a fire disfigures his hands and he loses his position, joins the rebellion against the British in the fight for independence.