Movie Review: "How To Train Your Dragon 3" Sets A New Standard For Eye Popping Animation 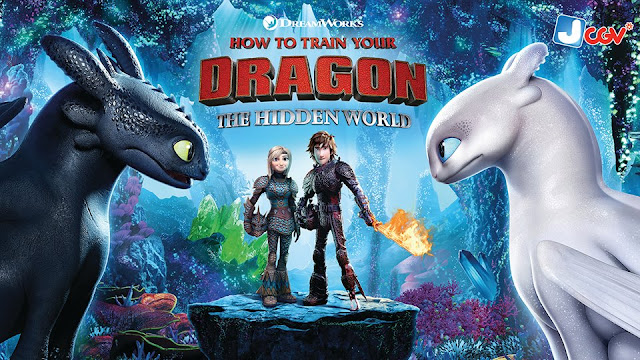 
For me, the original How To Train Your Dragon was a statement that DreamWorks animation, which started off very promisingly with The Prince of Egypt, was evolving past the days of beating Shrek sequels into the ground and was evolving into a major creative force. It was a wonderful, heartfelt adventure that stood on its own merits, and it remains one of the very best films of 2010.

Almost a decade later, DreamWorks isn't the power player it once was: sadly, the more sophisticated and daring they became, the less draw they had to mass audiences. But they have created two classic trilogies in Kung Fu Panda and now, the completed How To Train Your Dragon saga., and if anything this one is a more satisfying conclusion.

Set one year after the events of How To Train Your Dragon 2, Hiccup (voice of Jay Baruchel) continues to rescue dragons with his fellow dragon riders and friends in order to bring them back to Berk and create a bustling dragon and human utopia. Unfortunately, his efforts have also resulted in the island becoming severely overpopulated with dragons. In a response to the overcrowding, Hiccup desires to find the "Hidden World", a safe haven for dragons that his late father Stoick (Gerard Bulter, who appears here in flashbacks) told him about. Meanwhile, a white Night Fury dragon, held captive by warlords, is given to infamous dragon hunter Grimmel the Grisly as bait for him to capture Toothless for the warlords' use as an alpha.


There is really no other franchise to compare to this one in terms of the giant leaps forward in quality of animation with each new film (the closest I could come would be The Rescuers Down Under in comparison to the original). And for me, The Hidden World was akin to watching The Lion King again for the first time. As a long time dragon buff, I have rushed out to see every movie that features them, and this series has been the only one that has left me fully satisfied in terms of matching the scope of my imagination when I read the Dragonlance Chronicles as a teen.  While the movie works very well as an emotional and concise wrap of the story, it's hard not salivate at the thought of where the next one could have gone visually (the presence of Academy Award Winning Blade Runner 2049 cinematographer Roger Deakins, for my money the very best DP working today, as visual consultant was evident throughout).


The third film is perhaps not quite as intense and ambitious in scope as the second (certainly not as dark), with a more streamlined story. But it gives us plenty of the characters we have grown to love, and provides a wonderful arc for Toothless, and the long and ever deepening relationship between boy (now a man) and dragon is beautifully handled. Some of the very best sequences in the film are those between Toothless and his new found potential mate, and these are of course done without dialogue. These scenes are beautiful, full of rich characterization and wonder, and surprisingly romantic.

The voice cast is all in top form, with F. Murray Abraham providing a very effective if one note villain, and Baruchel and Ferrera nicely portraying how different their characters are from when we first met them. For those wondering about the much talked about revelation about Gobber in the last film (which was an add lib from Crag Ferguson that got left in the film and understandably seized upon by audiences, as this is a series that has been strongly embraced by progressives), it is confined here to Ferguson expertly milking one line to reference it, but if you're not looking for it, you'll miss it. Those who are looking for an excuse to be offended will be disappointed, while those who were hoping for something more overt will hopefully understand a tangent about it for what is largely a functional, comic character would have been intrusive to the story.

The one major piece of awkwardness is the question of whether that is disgraced actor TJ Miller doing the voice of Tuffnut. It certainly sounds like him, and Tuffnut gets quite a bit of screen time, but his name is conspicuously left off of the credits  as the others each  get a place of honor in a character card on the ending credits, but Tuffnut is nowhere to be found.( IMDB identifies the role as having been played by voice over actor Justin Rupple). The presence of Gerard Bulter in one last grand outing as Stoick is not only smoothly handled, but the flashbacks to Hiccup as very young boy add a lot to that character's arc. As someone who has changed his opinion on Butler many times over the course of a shaky career, to me Stoick is the one signature role the actors has that is entirely praiseworthy, and now that it's over . . . well, maybe Ralph Fiennes, who utilized Butler so well in Coriolanus, can find something for him. Otherwise, I'm going to pretend this was his last film, since he'll probably never make another one that gets screened for press anyway.

Above all else, How To Train Your Dragon: The Hidden World is a marvel of sight and sound, transporting us to a tangible fantasy world as well as I've ever seen done on film. It's exciting, gripping, emotional, and a fitting, loving end to a grand and truly epic trilogy (and if it's not the stand alone . . . excuse the pun . . . marvel that Into The Spider-Verse was, it isn't meant to be). This is one I'll be paying to see multiple times in a theater, and even if it isn't the very best of the year, it's likely to be my personal favorite.