Movie Review: "High Flying Bird" Has A Lot of Heart But Lacks Game 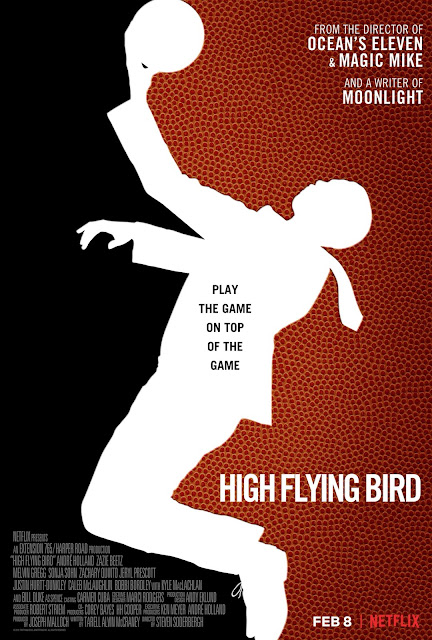 Despite a brief period of supposed retirement from features from 2013 to 2017, Steven Soderbergh is the only Oscar Winning director whose output threatens to rival Woody Allen and Clint Eastwood. As an artist, he's like a basketball player who takes the shot every time he gets possession of the ball: occasionally, he scores big (Traffic, Erin Brockavich, Ocean's 11, Logan Lucky). But in between every shot he sinks,, there are a lot of shots that just bounce off the backboard, if they even come that close. Unfortunately,his latest effort High Flying Bird, is hardly a slam dunk.

Set during a pro basketball lockout, High Flying Bird follows sports agent Ray Burke (André Holland) as he finds himself caught in the face-off between the NBA and the players. Ray wants his clients to know that he is firmly on the side of the players, like freshman Erick (Melvin Gregg), who has been drafted by an unnamed New York team. Due to the lockout, Erick isn't receiving any salary, and he’s taken out a bad loan to get him through the interim. Erick may know what he's doing on the court, but he's lost when it comes to "the game on top of the game", which is where Ray comes in: the agent is not only a streetwise expert, but more importantly, he's the lead character in a movie.
But Ray’s agency is starting to feel the adverse effects of the lockout as well, and his smarmy young white boss boss (Zachary Quinto) drops the bomb that Ray’s salary and expense accounts have all been suspended until the dispute between the league and the players is resolved.

The script by Tarell Alvin McCraney, the playwright whose In Moonlight Black Boys Look Blue became Barry Jenkins Oscar Winning classic Moonlight, plays a lot more like a play than that it does a screenplay, and frankly, it feels like it isn't out of the work shopping stage. The Aaron Sorkin wannabe dialogue is occasionally enjoyable, often labored and sometimes just plain cringe inducingly on the nose. McCraney is nothing if not passionate, and he has a lot to say about the way professional sports takes advantage of young players and turns them into a commodity. In fact, he has so much to say that the movie is literally non stop dialogue, and it plays more than a little like Robert Redford's Lions For Lambs: it presents a very solid argument, but in the end it feels more like a civics lesson than a movie. High Flying Bird is moderately stronger in terms of structure than that film was, but even less successful at creating drama. The occasional inter cuts of interviews with real life NBA players in order to make it feel raw and cinematic are an interesting choice, but most of what these guys have to say is really quite forgettable. The most potentially entertaining plot element involves a one on one game that we never actually see. I'd find that easier to forgive if the performances from Melvin Gregg and Justin Hurtt-Dunkley as Erick and his rival were stronger, but this sequence plays out like a major plot point in a theatrical play that is only talked about because you can't do it on stage. McCraney has an excuse for making this mistake, but Soderbergh most definitely does not. The moment comes at a crucial point in the film when an infusion of some energy and a demonstration of why basketball is the sexy, exciting sport Ray says it is would have made a big difference and gone a long way toward pulling audiences into the story. Soderbergh has the skill that he could have made this a rousingingly entertaining and stylish sequence. Why on earth didn't he?

Soderbergh, who shot the movie on an iPhone (at his best almost making it pass for 16MM and at his worst making it look like a cheaper Android, especially when actors get too close) was clearly focused a lot more on the fact that this film could be made cheaply and quickly than whether he had something that was truly ready to go in front of the cameras (or IPhones). There's no denying that there was a lot of potential here: Soderbergh has assembled a cast of talented and engaging actors and Kyle McLachlan, but their sluggish line readings often play like they are doing their first table read. It's a shame, because the bold statement being made about oppression and the crass ownership mentality of the league toward black athletes is really quite compelling. It's also hard to buy that this movie is really taking place in this setting when it's so low budget and guerrilla in its execution that even the few scenes of big money movers and shakers seem like they were shot in the cheapest locations that Soderbergh and his team could get in and out of before security showed up.

Holland is a gifted actor with a lot of presence, and his brief supporting turn in Moonlight was perhaps the most underrated performance of 2017. It's nice to see him in a lead role, but the fact is that we never feel nearly as invested in Ray as need to be for this film to work, and Deadpool 2's delightful Zazie Beetz slides by strictly on charm. There are no characters here, only vague templates of character types.

The themes of race, money and power, both in modern sports and the long and shady history of the industry, are complex and could not be more relevant at this time. The questions raised here are so worthwhile and the sentiment so heartfelt that it makes High Flying Bird a worthwhile endeavour if it sparks discussion and leads to more artists taking on the subject matter. For this reason, it's hard not to feel good will toward the movie. But as the film ends, with Beetz' Sam (Ray's ex-assistant) engrossed in reading Harry Edwards book The Revolt of the Black Athlete, it only punctuates the already very present feeling that High Flying Bird didn't even scratch the surface.

This is hardly a terrible film, but it's a surprisingly lifeless one that ranks near or below Haywire in the director's filmography. When I consider that my fondness for talky movies tends to be much stronger than most people, it's frankly hard to imagine Netflix viewers sticking with this movie all the way to the end, even at such a short run time. Thankfully, there's a wealth of alternatives to stream, and Sodergbergh fans (myself included) can only hope that his next effort (which features Meryl Streep, Gary Oldman and Will Forte) is nothing but net.