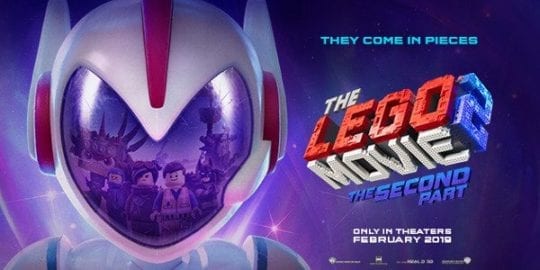 
If there is one franchise that may be in greater danger of over saturation than Marvel, Star Wars or DC, it's Legos. Though the original Lego Movie was a surprise gem in 2014, there is no getting around the fact that the new "second film" is really the fourth film. in barely five years (and that's not even acknowledging the countless games and straight to video incarnations). The result is that the fresh, unique "what a surprise" factor that the first movie held is decidedly gone. At the press screening for the original, people were rolling in the aisles, while this time around, the laughter was decidedly contained. It's not that The Lego Movie 2: The Second Part isn't funny - I found  myself appreciating the clever humor throughout - it just can't catch you off guard this time, and belly laughs are a lot harder to get when the audiences is expecting them.

In the years since the events of the first film, the Duplo invaders have turned Bricksburg into a post-apocalyptic wasteland named Apocalypseburg, and continue to invade periodically. On one occasion, Master Builder Emmet Brickowski (voiced once again by Chriss Pratt) attempts to broker peace between the citizens and the aliens with a Lego heart, to no avail. The ordeal has made most of Apocalypseburg's citizens hardened, but Emmet remains upbeat, wanting to move into a dream home with Lucy. However, Emmet is troubled by dreams of a pending "Our-mom-ageddon".


The story is fairly predictable, largely because the off the wall zaniness of this world doesn't require any effort to process this time around. We already know the big twist of the higher power behind everything, and the feeling of being transported is hard to get back. That's the bad news. The good news is that it is still a lot of fun, and while I enjoyed The Lego Batman Movie and even The Lego Ninjago Movie, there's a level of heart and deeper meaning to the story that is back here that we don't get in the disposable spin offs.

I have to confess that I've been getting a bit sick of Chris Pratt. But the movie plays off of the meteoric rise to fame and adoration that the first film just barely proceeded, and Pratt has never been lacking in the ability to poke fun at himself. Here he plays not only Emmett, but he doubles as Rex Dangervest, a too cool to be believed hero who is everything Emmett is not. The character not only blatantly references Pratt's greatest hits by giving him a spaceship and pet raptors, but his look and Pratt's speech patterns are blatantly modelled after Kurt Russell (who of course played Starlod's father in Guardians of the Galaxy Vol. 2). Over the past five years, this charismatic goofball has basically been the ultimate kid playing hero in his bedroom or backyard, except that the whole world has been watching. The movie makes great use of this fact, and you have to give Pratt a lot of credit for being as aware as anyone how odd it is that Andy Dwyer from Parks & Recreation became the new standard of cool. In fact, this may be the shrewdest move a star has pulled in some time, as the self deprecating themes of the film only make the big lug more endearing and may wall preempt a big Prattlash,

Tiffany Haddish is solid as the antagonist, Queen Watevra Wa'Nabi, and Elibabeth Banks, Will Arnett and company are all great support. And in a surprise cameo, another Hollywood superstar makes fun of his iconic persona and gives easily his best performance in years (which admittedly isn't saying much at all, but it's still enjoyable).

Writers/Producers Phil Lord and Christopher Miller and director Mike Mitchell pack this one with a wider variety of songs, knowing that they have to follow up Everything is Awesome but that if we had to hear it again as many times as we did last time some of us would come to their houses and smother them in their sleep. Haddish and Arnett share a number that's a major comedic highlight. But for me, the most important factor was heart, and that is where the movie really nails it, with a story that hit me much closer to home and genuinely made my eyes fill with tears.

I still question how long this franchise can keep going, but in many ways The Lego Movie 2: The Second Part accomplishes the impossible just as well as the first one did by being aware of the different set of obstacles it faces.